This year’s United States Women’s Open, run by the United States Golf Association, set a new record for success on a venerable and beautiful golf course. 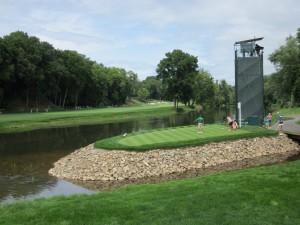 Over 134,000 fans attended the 2015 edition at Lancaster Country Club in Lancaster, PA, bettering by several thousand the previous mark set in 2005 at Cherry Hills Country Club in Colorado.

The Amish presence in southeastern Pennsylvania was nicely honored in the logo designed for the event. It could be seen all over the course, on hundreds of volunteers’ golf shirts, the hole flags, and thousands of souvenir items worn by the fans.

I arrived early Wednesday afternoon, July 8, the last practice day before the first round July 9. The limited parking on site nonetheless made space for media members, which came in very handy.

Unless you lived nearby and could walk, all of the fans had to use shuttle services from the nearby Park City Center shopping mall. That kind of community cooperation is critical to success for these tournaments.

Volunteers provided friendly greetings at the media entrance near the spacious driving range. Dozens of fans huddled on the little hillside behind the players, hoping for autographs as the women finished their practice. Most golfers cheerfully signed anything presented to them, especially from the many children there and elsewhere on the course that day.

Halfway down the range I briefly chatted with Dean Herden, the affable Australian caddie. We recently had an informative lunch during the ShopRite LPGA Classic in New Jersey in May, when he was working for Hee Kyung Seo. Seo didn’t qualify for the Open, and had asked Herden to help her friend In Gee Chun, playing in her first-ever Women’s Open.

Herden has been on the winner’s bag for over 40 victories on several tours, including a few women’s majors. With Chun’s eventual victory on Sunday, July 12, Herden’s sterling reputation earned a bit more polish.

The USGA Media Center was a downsized version of what I experienced at Merion Country Club for the 2013 U.S. Open. Inside an air-conditioned metal-framed tent, there were seats for roughly a hundred reporters and photographers, with the post-round interview table in front, and a TV lighting/camera stage set amidst the rows of desks. A small dining area was off to the side at the rear of the tent, kept well-stocked throughout the tournament.

Based on past observation at Congressional, Bethpage Black, and Merion, Lancaster CC had all the hallmarks of a USGA tournament–simply on a smaller scale. For example, none of the grandstands at Lancaster were the equal of the 5,500 seats placed at Merion’s bowl-like seventeenth green/eighteenth tee. This year’s Open at Chambers Bay had 18,000 seats in 14 grandstands, but that course earned criticism for the multiple off-limits areas fans could not go to watch the action.

Lancaster CC’s 13 grandstands totaled over 5,000 seats, but Women’s Open fans did not face the access restrictions imposed at Chambers Bay. It took a bit of planning, and a keen sense of when to use the hole crossings, but fans could follow their favorite players on Lancaster CC’s entire layout.

That said, Lancaster’s 18 holes are not an easy walk, with large hills to tackle. A roughly five-mile hike each round does not leave you anything but tired. The views are well worth it, however, from the combination of landscape features and the quality of the players.

This is the first of a series about the Women’s Open.

Delaware Hospice is the beneficiary once again for the fifth running of the Eleanor Soltner Memorial golf outing. It will be held Wednesday, Aug. 5, at Rookery North in Milford.

Registration, breakfast, and the range all begin at 7:30 a.m., followed by a shotgun start for the four-person scramble format at 9:00 a.m. Lunch, a silent auction, and the award ceremony take place after the round. The $100 fee covers the greens fees, cart, and tournament prizes.

Prabhat Karapurkar won the third flight, with Carolyn Ortwein taking second and Monica Fleischmann coming in third. Pattie Magee was closest to the hole for the day.