When no options seem all that great

LPGA golfer Jennifer Song did not have a good 2015 U.S. Women’s Open. She shot 6-over par on each of the first two days at Lancaster CC, missing the cut for the top 60 and ties that would play on the weekend.

On the other hand, she also provided a good example of how the Rules of Golf provide options for certain situations.

In her second round, I watched Song’s tee shot on the 180-yard par-3 sixth hole fly toward the green. Then it veered left a few yards, directly into the adjacent stream that ran in front and to the left of the green. The water’s greenside bank was marked with yellow stakes and yellow paint, and there were red stakes on the other side of the creek. 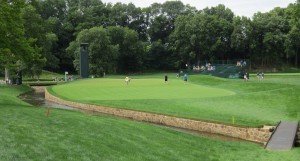 Jennifer Song’s tee shot on the 6th hole at Lancaster CC went left and into the creek alongside the green.

Where to play next?

Song and her caddie had several chats with the USGA rules official accompanying her group, and walked both sides of the stream. Dozens of fans politely pointed to where the ball flew into the creek.

Apparently taking the next shot from the tee box or the green side of the stream, with a penalty stroke thereafter, did not appeal to Song or her caddie. Instead, she dropped the ball on the opposite side of the creek, near where the fans had been sitting, equidistant from where the ball had entered the water, and below the hole.

Her chip shot from there checked up and stopped within two feet of the hole. Song converted the bogey putt (penalty stroke included), and finished her tournament 12 holes later.

Her options weren’t the best, but Song was nonetheless able to minimize the damage from her errant tee shot.

During a recent round at Baywood Greens, my 5-wood tee shot on the 288-yard par-4 12th hole landed in the center of the fairway, near the 100-yard post. My Bushnell GPS watch said the middle of the green was 109 yards up the hill, with the back edge of the green 12 yards further up the sloped surface.

With the hole set only a few yards from the back edge, I hit a 9-iron, hoping to hit it close, and knowing that the uphill lie would take a little off the club’s usual distance.

I hit it a little too well. The ball flew up the hill, landed in the middle of the green, and then spun back 15 feet down the slope, leaving a good 45-50 feet of putting. That led to an annoying three-putt bogey.

Given the uphill fairway slope to an even more sharply sloped green, I probably should have gone up another club for a better approach.

Some distance measuring devices, such as a few laser rangefinders sold by Bushnell and Leupold, include a slope feature. These tools take elevation changes into account and provide an “effective” distance, in addition to the normal distance calls you receive without engaging the slope feature.

This is one of those technology and equipment issues where the ability to help golfers outstrips the amount of help that the Rules of Golf permit. That’s because the Rules don’t permit the use of slope features on distance measuring devices. In fact, the current Rules punish players who use rangefinders that have this option, regardless of whether they take advantage of the opportunity.

The new changes to the Rules of Golf, adopted by the USGA and the R&A to go into effect Jan. 1, continue to prohibit the use of the slope feature on any measuring device used in a tournament. However, the possession of any such device during a round no longer carries such severe consequences. Golfers just have to be careful not to switch their devices to the slope feature elements during the round.

In essence, the Rules change makes golfers’ buying choices a little easier, if they were concerned about compliance with the Rules. However, those playing with golfers who use such devices may find themselves in the unenviable position of watching how their competitors use their rangefinders, instead of focusing on their own game.

The Rules no longer assume the worst about those who own such devices, through the outright prohibition. Instead it’s now left to those who watch over the competitions to decide if anyone obtained a bit more help than they should have.