The phrase “golf book” covers a wide range of types within it.

Of the 250 or so golf books in my library, a good twenty percent or more are essentially instructional manuals, aimed at improving the scoring prospects of their readers.

A sizeable number are classic sports histories, such as John Feinstein’s A Good Walk Spoiled, one of several year-on-Tour studies.

Some are humor books, such as those by Rick Reilly. A whole host of others are beautiful coffee table tomes, with gorgeous photographs and breathless prose. A few are well-done novels, and a few more are biographies, such as Curt Sampson’s masterful “Hogan”.

Nonetheless, there really aren’t too many golf autobiographies out there, even of the “as told to” variety.

Perhaps that’s because most pro golfers do their best talking with their clubs–or perhaps the genre just doesn’t sell as well as the other golf categories mentioned above. 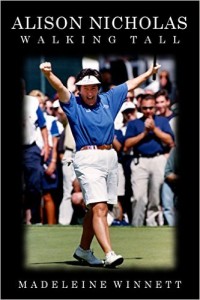 In any event, the new autobiography of Alison Nicholas is a welcome addition to this limited part of the golf book genre, and is well worth your consideration (Alison Nicholas: Walking Tall, Bennion Kearny Ltd.; $19.99 SRP).

Written by Madeleine Winnett, the book tells the story of one of England’s best women golfers, a contemporary of Laura Davies but who is not nearly as well known by those who are not avid golf fans, at least in this country. I am sure she is far better known in Great Britain.

Nicholas won the U.S. Women’s Open in 1997, and played in several Solheim Cup contests. She also captained the European squad twice, first losing in 2009 and then winning the team event in 2011.

She was born in Gibraltar in 1962, the youngest daughter of an anesthesiologist and nurse, and grew up in the Sheffield area of Yorkshire, England. Her parents divorced, but she remained close to both. Her father introduced her to golf when she was a teenager, after some less than stellar attempts at tennis and other sports.

From what we’re told, Nicholas took the game seriously almost from the start, and her serious practice habits paid off handsomely, reaching scratch or better status in short order. This came in handy, because as she tells it, her academic shortcomings argued against obtaining a university degree and taking the corporate path to success.

Nicholas turned pro in 1984 after several successful amateur competitions, where she first met Laura Davies. The two women hit it off quickly, and have remained fast friends. Their nicknames for each other stuck fast: Big Al and Tiny.

Their approach to the game in some respects mirrored the difference in their sizes. Davies is not a little person, and became justly famous for her prodigious drives. Nicholas is tiny, at just under 5 feet in height, and depended on her short game to offset any disadvantages off the tee.

Nicholas admits to a few other handicaps of the personal variety. She describes being painfully shy, in a sport where self-promotion is a valuable asset, and to sometimes crippling bouts of self-doubt. On the other hand, she understood that her best performances would come from renewed effort. During her playing career she frequently benefited from a regular training regimen, which she describes here.

In a sport that usually focuses on individual performance, Nicholas also became completely enthralled by her Solheim Cup experiences, beginning with the very first year of the event. She became the ultimate team player, and a favorite of the European squads for her attitude and spirit in the competitions.

These parts of her book are perhaps the most interesting, not least of which because of the interpersonal dynamics involved, as well as the increasing current interest in golf’s team competitions, both male and female.

Nicholas also gives a detailed glimpse into the business of professional golf, from playing in pro-ams to her relationships with her caddies. A story about being sponsored by IBM along with Davies and a few other golfers early in her career is also very funny.

The book is not just about golf, thankfully. Nicholas is a committed Christian, and devotes a portion of the book to how and why she has remained so. Some might consider that fact a bit off-putting, but it does provide some significant insight into Nicholas’ personality.

While no longer active on the LPGA or the European women’s Tours, Nicholas remains busy in golf as a teacher and speaker in England. She may also appear the upcoming U.S. Women’s Senior Opens, as a contemporary to Nancy Lopez and other legends of women’s golf.

It would be fun to see Big Al play again.

Handy on the golf course

The folks at Under Armour sent me one of their new sunglasses to try out, the Igniter 2.0 with Game Day lenses.

According to the ad copy, the new lenses are designed to enhance the contrast between the golf ball and either the sky or the turf.

They have a point. The lenses are a yellow tint, reminiscent of some ski goggles I once had, and the color contrast is definitely improved compared to not using sunglasses.

In the late fall sun, especially the afternoon, these lenses improved my ability to track my drives, find my ball, and read the greens. You might them equally useful. Try the local Under Armour outlet store or Dick’s Sporting Goods, or ask your golf pro ($89.99 SRP).