PGA Merchandise Show covers the game from head to toe

With over 1,000 exhibitors dedicated to every aspect of golf, the 2016 PGA Merchandise Show reached from head to toe for all golfers.

Here are three examples from the Orlando, FL conference, held in late January.

Some exhibitors are pretty specialized in what they sell, but for them there’s a valuable niche in golf to exploit.

I had that impression about the folks at Popticals, an eyewear company that is marketing their new folding wrap-around sports sunglasses. 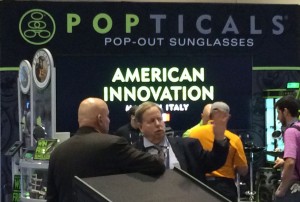 Sales reps and customers chatting in front of the Popticals booth at the 2016 PGA Merchandise Show.

Wrap-around sunglasses, whether for golf, skiing, or other sun-drenched sports, are a great invention. They protect the eyes from excess sunlight, especially the indirect variety that would otherwise come from the periphery.

The only glitch is that these sunglasses are a bit bulky. They’re just not as portable as other eyewear, unless they are on your face or the top of your head.

Preston Porter, a Social Media Specialist for Popiticals, said the company founder is a skier, and originally faced this issue while on the mountains. The solution was to develop a rail/slider system that overlaps the lenses until they are needed for wear.

The lenses then slide out along the rail, held firmly in place by magnets. The thermoplastic sidepieces also fold out to full length, completing the process of making them ready to wear. 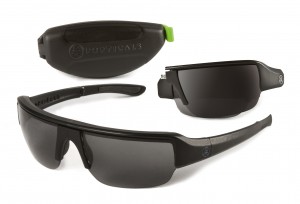 Popticals fold up for easy storage and portability, fitting into the little container at the top of this photo.

To store the Popticals, the frame folds back in on itself and into a palm-sized hard-shell case that has its own carabiner clip, for hooking onto a belt loop or other handy spot.

Porter said that due to the curvature of the glasses, prescription lenses are not yet available in this first edition.

Popticals will be available this spring in five different styles, with the MSRPs starting at $169.

The Oakley brand for golf centers on apparel and eyewear, and is perhaps most often seen during golf telecasts when modeled by Masters champion Bubba Watson.

Rodriguez explained that the displays mirror the clothes selected for wear during each of the four competitive rounds of professional golf tournaments.

I wondered if Oakley’s marketing staff took into account the varying levels of golf interest that run from Thursday through Sunday. I assume avid golf fans watch the first two days, joined by more casual viewers on the weekend. It would be interesting to learn which clothes had the higher sales volume, and if the days Watson wore them were in any way connected to those sales.

We also looked at several different models of Oakley eyewear, all featuring the company’s Prizm lens technology. As Rodriguez explained, these sport specific lenses are designed to enhance clarity, contrast, and color.

The non-polarized lenses use the yellow color spectrum to “break out the greens,” as Rodriguez put it, and thereby enhance depth perception when out on the course.

Of those I saw, the Radar EV model looked the most golf-like. The frame holds the wraparound lenses from above, but Radars are frameless below the nosepiece. That should help with putting, by eliminating potential view blocking from a frame. The suggested retail price is $190.

Another model, the incredibly lightweight EV Zero, is frameless above and below the lenses. It gave every appearance of being better suited to cycling.

From a fashion perspective, the Radar and Zero models are so sports-oriented that they frankly wouldn’t look right in other environments.

Oakley therefore also offers several full-frame, flat front models in their “Lifestyle” designs. Some of these glasses call to mind Clark Kent, in a hipster kind of way.

Oakley eyewear is locally available at the Heritage Shores pro shop and Ruddo’s Golf, and online at Oakley.com. 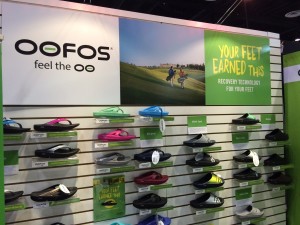 The OOFOS booth at the 2016 PGA Merchandise Show

The folks at the OOFOS footwear company are focusing their business at golfers’ desires for an “after shoe”. That’s the pitch John McMahon gave me during the Show.

He suggested the sandal-like shoes are perfect for right after a round (or two), when all a golfer wants to do is take off her spikes and slip into something far more comfortable.

The closed-cell foam that makes up most of the OOFOS shoes are what McMahon called “recovery wear” for just that purpose. “They act just like shock absorbers,” he said. “We think they are part of your active lifestyle.”

Golf was not where OOFOS made their first steps in business, as it were. The developers came from an athletic and running shoe background, and developed OOFOS to give runners a chance for a “rebound and energy return”, according to McMahon. 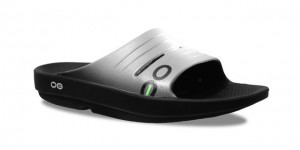 The shoes do bounce a bit when you walk in them, and the model I tried was very comfortable. From its start in running specialty stores, OOFOS shoes are now available in over 1,300 outlets—including Ryan’s Surf Store and Rehoboth Lifestyle in Rehoboth Beach, and the Lewes Harbour Marina in Lewes, according to the company’s website.

The models range in suggested retail price from $45 to $65.