2016 PGA Merchandise Show is a major of its own 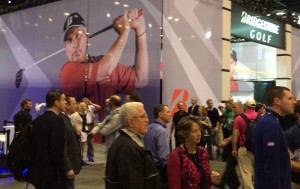 The massive photograph of Masters champion Fred Couples looks down on the crowd at the PGA Merchandise Show.

There was a distinctly hopeful buzz around the huge Orange County Convention Center during this year’s edition of the PGA Merchandise Show, held Jan. 26-29.

For the golf pros and others coming to Orlando, FL from the northeast, it may have had something to do with escaping Winter Storm Jonas, which dumped umpteen inches of snow and whacked the Atlantic coastline.

For others it may have had something to do with a general sense of improving golf business prospects. With over 42,000 attendees and a million square feet of exhibit space for over 1,000 golf businesses, the PGA Show is the main event for those looking for a piece of the multi-billion dollar golf action.

I reached the Show Wednesday afternoon and met with Brian Schielke, a senior project manager for Srixon/Cleveland Golf. The company makes some of the most popular wedges in the country, and devoted a portion of its booth space to its new Wedge Analyzer.

That’s why I went there, because Rookery North golf pro Kyle Deas told me The Rookery will offer this wedge-fitting service later this spring.

Schielke showed me the special Cleveland wedge built for the Analyzer system. A Bluetooth-enabled motion sensor device is attached to the club shaft, an inch or two below the grip.

“Everyone swings their wedges differently, but basically there are three types: shallow, moderate, and steep,” Schielke said. “You also have to know where the shaft lean is at impact. It’s supposed to be leaning forward, but that doesn’t always happen.”

The analyzer process obtains and reports data from a few swings at a ball, either on the range, on the course, or indoors. Schielke said better data is obtained from the most golf-like conditions. Some folks just don’t swing the same way if they’re hitting off a mat.

The swing data goes by Bluetooth to the analyzer software loaded into a nearby tablet, such as an iPad. “It takes into account your swing and also the types of turf on the courses you play,” Schielke said, such as hardpan, soft turf, or something in between. It also considers whether the golfer is hitting flops, chips, or full swings, and has a replay function similar to a launch monitor.

The system uses the data from the swings to recommend which lofts, bounce angles, and sole grinds would best fit the way the golfer actually uses the wedges on the courses he plays. It works for blade-style wedges or the more-forgiving cavity back types, according to Schielke.

Naturally, Cleveland just happens to offer a very wide range of wedge lofts and designs, so the golfer looking for some help should be able to find it pretty easily, once he uses the Wedge Analyzer.

Last year I switched back to a 4-iron from a 5-hybrid. My tendency to draw or hook is often intensified when I use hybrids. One reason for that is that most hybrids have a built-in draw bias, to help golfers who tend to hit slices.

So when I saw the Ben Hogan Golf Company’s VKTR Hybrid display, highlighting the club’s neutral setting, I asked for a spokesperson.

Frank Walley is a customer service rep for Hogan, and a former college All-American and teaching pro. He answered my questions with a pleasantly direct manner that Mr. Hogan would have approved. 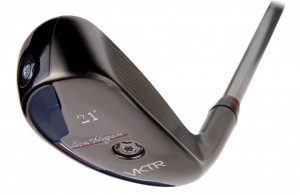 The new Ben Hogan VKTR Hybrids feature no offset and four adjustable weight ports, two of which are visible in this photo, provided by Hogan. The other two ports are at the heel and the center back of the club head.

Walley grabbed a VKTR hybrid from a display, and we chatted as he highlighted its features.

He first pointed out that unlike most hybrids, on these clubs there is no offset for the clubface. That’s a classic design solution for slicers, and one of the reasons why folks who hit draws have such trouble with hybrids.

The clubs also feature four different adjustable weight ports, with one weight significantly heavier than the others. “You put that extra weight where it’s needed, to help deal with your tendencies,” Walley said. The ports appear on the toe, heel, center back, and the bottom. Moving the weights around can affect the spin rate and the launch angle.

The clubs’ hosels are also forged, which gives club fitters a chance to make further adjustments to the clubs during the fitting process.

In addition, Walley said, “The shafts are cut to iron lengths. These clubs are designed to spin and contr ol the ball like an iron does.”

The hybrids range in lofts from 17 to 27 degrees. Hogan recommends keeping to a 4-degree gap in the hybrids golfers choose for their bag, as with other clubs. The VKTRs will be available this spring, and the MSRP for the graphite-shafted clubs is $249. 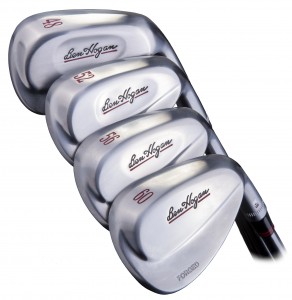 The new forged Ben Hogan TK wedges are designed with a progressive weight shift higher up the club as the loft increases.

Walley also showed me the company’s new forged TK wedges, aimed at producing lower launch angles with high spin rates.The lower angles are achieved in part by moving some of the club’s weight further away from the bottom, which also moves up the center of gravity a bit. Considering how many times players hit wedges from thick or high turf, this weight shift should also help golfers produce more solid hits.

The V-sole on these clubs should also help golfers avoid digging into the turf on more challenging lies, and is a mix of high bounce in front and lower bounce in back. The V-soles are progressive throughout the club sets. For example, it is very noticeable on the TK wedges, but can also be seen in a much-modified form on the new hybrids.

The TK wedges will be available in May, according to Walley. The MSRP will be $149 for the steel-shafted wedges, and $169 for the graphite option.