The folks at Children’s Beach House wasted no time in alerting their supporters of their annual spring golf fundraiser—as usual.

The CBH is perennially one of the first charitable organizations to send out Save The Date announcements for their golf tournaments. From what I can tell, this intelligent approach to fundraising always pays dividends.

The Beach House is a Lewes institution, meeting the specialized needs of children with various challenges at its beautiful facility on the Delaware Bay.

This year’s tournament takes place May 26, at the Jack Nicklaus Golf Course at The Peninsula, near Millsboro. The shotgun start for scramble format event is at 11:30 a.m., with a poolside buffet dinner at 5 p.m. The $210 fee per golfer includes range time, a boxed lunch, and the after-round buffet.

A Dinner Only option is available for $75.

This is a reminder to other Cape Region fundraiser tournaments to let me know 4-6 weeks ahead of your event, so that an item appearing in this column will have the best chance to help.

You know you’ve made an impression when one of your questions makes a scientist raise a single eyebrow in response.

I didn’t start off with that goal when I approached the Ping booth at January’s PGA Merchandise Show in Orlando, FL. It just happened that way.

Paul Wood, Ph.D. is the Vice President for Engineering for Ping golf. He was the third or fourth person to whom the folks at the Ping booth directed me, when I said I had some questions about why and when someone should replace their irons.

Wood just happens to head up the engineering section at the popular golf club company, and the Hereford, England native was very cordial.

I think what caused the raised eyebrow was that no one had asked him the question in the form I posed.

The question was, what was so much better about the new G clubs that should convince a golfer like me to make the switch. 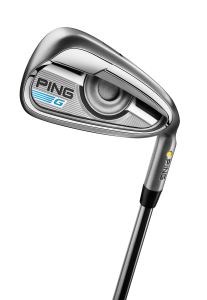 That’s what made his eyebrow raise up—and after a second or two, Wood began to answer.

First, he stressed that John Solheim, Ping’s president, will not let a new model line come out unless it is demonstrably better than the previous one. Wood said, “Does it produce a faster ball speed? Is the launch and spin better than the rate of the last one? What’s the dispersion analysis? Does the ball go higher, farther, and straighter?”

Wood also said Ping usually takes about 18 months to develop a new model line for its clubs—so for G10s, that would mean they date back about 8 years since inception, an eternity in current golf design.

The G10s were designed for golfers seeking more forgiveness on their mishits, and the new model Gs share the same goal.

In describing the differences, Wood began with the forgiveness element, suggesting the new model does a far better job with mishits of either the heel/toe type or the high/low on the clubface type. Wood said the new model also permits a bit more “bending on the face, but not at the expense of forgiveness.” The bending promotes a bit more speed.

He also said the G clubs are a “degree or two stronger” than past models, in part because the center of mass is both lower and further back in the club. According to Wood, this means that the clubs “don’t need as much static loft” to produce the same shot.

Wood also stressed the need to consider aesthetics, considering that most golfers prefer a thin look to the top line of their irons. “Tastes change, but you don’t want it to look too bulky. Psychology definitely plays into it, a lot,” he said. Wood felt golfers would like the “smaller, narrower look” of the new G clubs.

We also talked about the aesthetics of putters. Wood gave an example of Ping’s Sydney putter. The engineers loved it, despite the fact that it looked like “a Klingon warship,” as Wood described it.

Based on golfers’ reaction to the Sydney’s unusual look, Ping’s engineers greatly simplified things with the Nome putter, a broad-based mallet design. The next incarnation of much the same technology was the Ketsch putter, an even simpler-looking mallet style.

By the end of the interview, as we chatted about the lower divisions of English football, Wood had me pretty well convinced I should test the new G clubs, and see if my iron game could improve with a new investment.

Perhaps this Ping engineer has a new future in sales.

That would be logical.

Ping clubs are sold locally at The Rookery’s North and South courses, Baywood Greens, and the Ruddo’s Golf store on Route One.