Conditions were harsh for the players and the spectators. A steady drizzle, occasional wind gusts, and temperatures barely creeping above 50 degrees inspired many present to use multiple layers to ward off the chill. 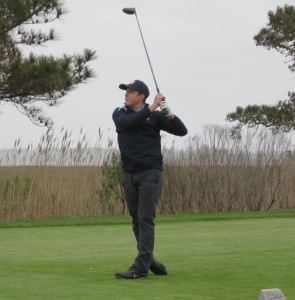 Viking senior Jack Ashby watches his tee shot on the par-4 8th hole at The Peninsula, during the April 29 match against Delmarva Christian.

Matt Zehner won medalist honors again with an 8-over par 44 on Peninsula’s front 9. Jack Ashby showed no obvious signs of ankle problems, as he posted a 49 for second best among the Vikings, one stroke behind Delmarva Christian’s Christopher Vonhof.

Dane Palmer’s 50 was third best for the Vikings, and was a bit of an improvement over recent rounds.

Barry Staebler’s 57 included an unintentional trick shot. On the par-4 third hole, Staebler skipped his tee ball on the water of the pond and up into the right rough, earning applause from some of the onlookers.

Ashby and Kyle Monigle both shot 54s, so one of their scores completed the Viking rout of Seaford.

Head Coach Claudio Smarrelli is adjusting the squad make-up for each match, trying to make sure the golfers play enough matches to qualify for the state tournament, if the team’s record improves sufficiently.

This year’s state championship is at Rehoboth Beach Country Club May 31-June 1. It would be great if the Vikings were able to host the event with a full team.

Five-person scramble teams, at $50 per player, will have a shotgun start at 5 p.m., rain or shine. Club rentals are included for those who need them.

The entry fee includes prizes and raffles, closest to the pin prizes, and the traditional hot dogs and hamburgers.

There are a wide variety of sponsorship opportunities available. The title sponsor spot remains open. You can also sponsor a hole, help with food costs, or be a Camper’s Friend, earning a sign placed along the course during the event. In-kind donations for prizes and raffles are also cheerfully accepted.

The event supports Alzheimer’s disease research and the Sussex County chapter of the Alzheimer’s Association.

The shotgun format begins at 9 a.m., with a luncheon to follow at the Cottage Café in Bethany Beach. Door prizes are in the mix for participants, in addition to the usual prizes for the top winning foursomes. There will also be a live auction of donated items, including playing certificates for golf foursomes.

The $75 tournament fee covers green fees, cart, and the luncheon. Hole sponsorships are also available for individuals and businesses.