Biography of Harvey Penick goes well beyond Texas golf, just as he did

The multiple golf bookshelves in my home office include a dozen or more instructionals, such as Ben Hogan’s Five Lessons.

Keeping a golf library of a few hundred books is admittedly unusual. I am completely typical, however, when I say that Harvey Penick’s Little Red Book has probably done more for my game than any other book in my extended golf library.

When I reviewed Penick’s first bestseller in 1998, I had been relying on the book’s pithy teachings for over six years. In the intervening decades, nothing’s changed in my assessment of the value and utility of the lessons from this shy, reclusive former golf caddie, now beloved by thousands.

The Little Red Book continues its remarkable outreach. Six different editions, including hardback, paperback, 20th anniversary, and audio, are sprinkled throughout the top 40 of Amazon’s 100 Best Sellers in golf, a stunning achievement in publishing.

Kevin Robbins is a longtime sportswriter, with a current role as a lecturer at the University of Texas School of Journalism. His grandmother gave him a copy of the Little Red Book as a 1992 Christmas present, and its lessons obviously had a tremendous impact on him. 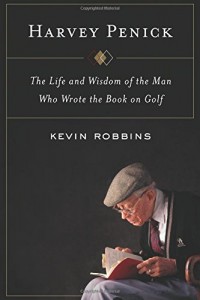 Harvey Penick: The Life and Wisdom of the Man Who Wrote the Book on Golf

For all the praise and adulation Penick received during a long and successful career as a golf pro, the man himself never seemed to be affected by it. That’s one of the points made repeatedly by Robbins in his thorough biography, “Harvey Penick: The Life and Wisdom of the Man Who Wrote the Book on Golf” (Houghton Mifflin Harcourt; $28.00).

Penick was also a man of few words, going to great lengths in his work with students to make his points as simply as possible. That created a bit of a dilemma for Robbins—how to say enough about a man who hardly said anything?

The saving grace for Robbins, and for Bud Shrake before him, was that Penick had a remarkable flash of insight early in his teaching career. He began to write short notes about teaching, the swing, some of his students, and some of his own experiences. These notes formed the basis of his Little Red Book and its several, highly successful sequels.

Shrake, a successful sportswriter and a high-spirited Texan in his own right, was lucky enough to be there when Penick agreed to memorialize a lifetime of teaching into a useful book for many. The story of their collaboration is one of the best parts of Robbins’ biography.

There’s also a strong element of Texas golf history running through this book. That makes sense, and not only because Penick was essentially present at the creation and for decades thereafter. He played a critical role in the development of the storied University of Texas golf program.

Penick was even more influential in the development of some of the finest women golfers this country has ever known. And, of course, Tom Kite and Ben Crenshaw grew up at Austin Country Club under Penick’s tutelage.

Not bad for a self-described “grown caddie.”

The Texas golf stories also reminded me of Del Lemon’s Story of Golf in Oklahoma, another well done golf history. Both books do great work in describing how golf grew during the 20th century, especially in the American West, a very different world than anything the Scots experienced at the home of golf.

The book ends with the still unreal finish to the Penick saga—the stunning performance of Crenshaw at the 1995 Masters, the week of Penick’s funeral.

Anyone suggesting that plot line for a movie would have been chided for excessive hokeyness. It goes to show that real life can sometimes take us on emotional journeys for which fictional accounts are a faint imitation.

I recommend anyone planning to read this book to first re-read, or experience for the first time, Penick’s own masterpiece. Having the immediate memory of the wisdom of the Little Red Book in your head as you read this biography will only enhance your appreciation for its subject.

Pat Devoll won the closest to the pin contest.

Correction: The Sussex Pines Ladies won their recent team match against Jonathan’s Landing. The May 13 column erroneously reported the event as a Sussex Pines loss.

Congratulations to the University of Delaware Blue Hen women’s golf team for their fine 2106 season. They won their first-ever Colonial Athletic Association championship in mid-April, which qualified them for the NCAA Regionals, held in Texas May 6-7.

The Blue Hens finished their season in 17th place in the Regional, with UD Senior Andi Slane in a tie for 53d as the best UD golfer in the event.