Between grass and trees, pick grass every time

That’s because most of the trees on the property are now gone.

Over the last several years, Oakmont removed thousands of trees, restoring the famous layout to how it appeared when it first opened decades ago.

Several historically significant golf courses throughout the country are also busy removing trees as a major part of their renovation projects.

Keith Foster is among the golf course architects leading this trend toward restoration through removal, in addition to following the more traditional approaches to updating and improving golf courses.

Foster is a former protégé of Arthur Hills, designer of Heritage Shores Club in Bridgeville. After leaving the Hills firm, Foster did several new courses himself, including the River Marsh Golf Club in Cambridge, MD. After 2001, however, Foster developed a specialty in restoring and renovating a few courses each year.

In Delaware, he oversaw the reconstruction of Wilmington Country Club’s South Course, a 1960s’ era Robert Trent Jones design. He’s also done great work at nationally famous layouts, such as Colonial Country Club in Fort Worth, TX, and the Philadelphia Cricket Club, site of a Tour of Champions major June 9-12.

“I try to execute the intentions of the original architect. For example, I redid the bunkering at Wilmington in Jones’ bolder style. Redoing the course also required tree removal, in addition to re-grassing and re-greening it,” Foster said in a recent interview. 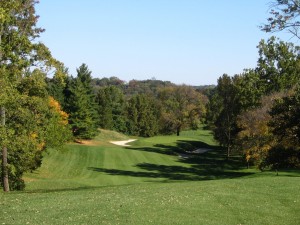 Foster’s most recent project was a major re-do of Moraine Country Club in Dayton, OH, with tree removal a major element. “It’s so great that clubs in leadership positions are taking the initiative,” Foster said. “They were so kind, and so trusting.”

“I walk and spend time on the property before talking to anyone,” Foster said. “I can look at the whole course in a more holistic way.”

Tree removals often return golf courses to the original designer’s intent. In one instance, for example, the fairway had become pinched in to only 22 yards. Foster restored the fairway to its original 35-yard width.

“Over 40 to 50 years, trees cause a slow choking of the scale of the property,” Foster said. “I’m restoring the boldness that was there.” 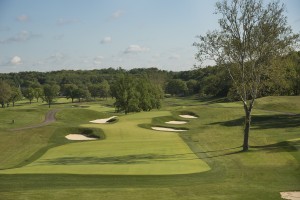 View of the same hole at Moraine CC, after the recent renovations by golf course architect Keith Foster.

The photos I’ve seen of the before and after at Moraine CC are really impressive. As Foster said, “Trees limit a course’s potential. Golf is supposed to be a charming nature walk. In the late 1990s and early 2000’s there was too much focus on making hard, difficult courses, rather than what is more enjoyable.”

As he put it, no one likes to hit a ball sideways because a wall of trees blocks the direct path to the green. “It’s supposed to be a game where you hit the ball, go find it, and hit it again toward the green,” Foster said.

When I asked about trees on dogleg holes, and how difficult that challenge can be for shorter hitters, Foster became even more animated: “Too many clubs were aiming at the top 1% of the golfers, and foregoing who’s really playing the course. I think course design should go for the 80% instead. You can always make a course longer for the skilled players. The challenge is to bring back the boldness that was there, and make the nature walk enjoyable,“ he said.

“There are several steps,” he said. ”You remove the small and incidental trees and undergrowth that don’t fit the ordinance definition. You bring in an arborist to find the poor quality and poor health candidates that should be removed. You try to convince people to remove the white pines and silver maples that were soldiered into so many courses in the 1950s and 1960s. They’re just bad for golf. “

“You also plant local trees to provide fencing at the borders of the property, and where you can, reintroduce native hardwood stands on the property where they won’t affect the golf, “ Foster said.

(This is the first of a two-part series. Next week: Kings Creek CC and its successful tree/underbrush project.)

Michael Bollig won the Sportsmanship Award, and Kyle Monigle is the Most Improved Undergraduate Player. Jack Ashby and Matt Zehner won the Captain awards, and Zehner was the season’s MVP.

He also thanked the Cape Henlopen Golf Boosters for their help, especially in donating “many, many golf balls.”

The Stephen R. Lett Scholarship Fund awards deserving high school graduates with $2,500 per year for four years, based on a record of leadership, community awareness, and academic discipline.

The Lett’s Play Golf Tournament, held this year on July 29, is the primary source of the scholarship money. The popular event at Kings Creek Country Club usually attracts over 100 golfers for the daylong event.

This year, the Fund is making two awards for the first time.

Nathaniel Vincent, a three-sport athlete at Delmar High School and a 4-H Junior Leader president, will be going to Harvard.

For more information about the Fund, click on the link above.