Geyer was a standout golfer for Wesley College in Dover, as well as for Milford High School. He died when a drunk driver hit him as he walked along a road in Morgantown, WV, where Geyer had gone to see a West Virginia University basketball game.

Friends and family organized this successful tournament to raise scholarship money for deserving Wesley students, in his memory. The first such event took place in 2014.

The $100 entry fee for the each golfer in the four-player scramble format covers the range balls, greens fees, carts, door prizes, and the dinner following the 1:00 p.m. shotgun start. There will also be a silent auction.

Jeff Allen of Wild Quail Golf and Country Club in Wyoming, DE won the tournament with a 69-73-142 performance, in blistering heat.

Golfers from upstate predominated among the players. Earl Dunnock and Mark Yoder, Jr. competing out of The Rookery, and Richard Swearer from Bear Trap Dunes, were the only golfers from Sussex County clubs.

The Milton Fire Department and Milton FD Ladies’ Auxiliary invite golfers to join them in a Fall Golf Outing fundraiser for the volunteers on Sept. 21, at The Rookery South golf course.

Registration and breakfast begin at 8:00 a.m., with a shotgun start for the scramble format beginning at 9:00 a.m. The $280 fee per foursome, or $75 fee for individuals, covers the greens fees and cart, beverages during the day, lunch, and prizes and awards after play. 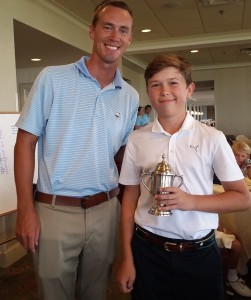 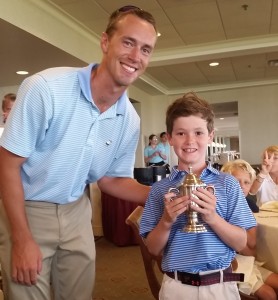 Based on the photos sent in of the winners, the kids had a lot of fun.

Lucas Skonieczki is this year’s 1-hole club champ, with Patrick Healy in second. 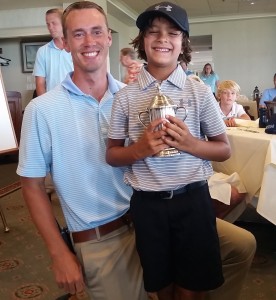 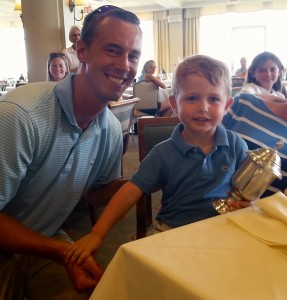 Pete Jones and Tom Ford won first place low gross in this year’s Senior Men’s Member-Guest tournament at Kings Creek Country Club, held July 8. The win came courtesy of a match of cards, putting Dennis and Tim Durkin into second place. Ford also won closest to the pin on the fifth hole, and Ford was closest on the sixteenth.

The other gross score top finishers included Don Hutchinson and Jim Mahoney in third, Phil and Vince Ranalli in fourth, and Drew Romans and Mark Burdett in fifth.

Steve Dibiagio was closest to the pin on the 8th hole, while Jack Moyle’s shot was closest on the eleventh hole.

Each four-person team consisted of two women and two men, in a four-person scramble. Each player also had to contribute a minimum of two drives during the round.

Andy and Amy Rowe teamed up with Scott and Kara Bourdreau to win first place with a net score of 54.7, in very hot conditions.

Fourth place net went to Jim and Jeannine Doane, Gary Barth, and Linda Eicher, and Lee and Vicky Tull teamed up with Rick and Robbie Monkman for fifth place net.

In this format, each golfer plays her ball. The team score uses the two best par 3 scores, and one best ball score on the par 4s and 5s.

The Kings Creek CC Ladies 18-Hole group played a Three Blind Mice game Aug. 16. In this format, each golfer plays her ball, and after the round, the pro shop randomly selects three holes. The scores from those holes are tossed out, with the winner picked from the remaining total.

Katie Heintz won first place in the first flight, with Cory Warther in second and Linda Outlaw in third.

In the second flight, Debbie Grant was first, with Prabhat Karapurkar in second and Sue Griesemer in third. Anita Pettitt was closest to the pin.

Brenda Lewes won the Vice-President’s Cup. Sandy Harrison won her Flight, with Madelyn Macklin in second and a two-way tie for third shared by Kathy Hudak and Linda Townsend.