The annual Patriot Golf Day fundraiser is scheduled for Labor Day Weekend, Sept. 2-5. This is a great opportunity for Cape Region golfers to show their appreciation for our nation’s men and women in uniform.

At participating golf courses, golfers donate funds for college scholarships for U.S. military dependents whose spouse or parent was killed or disabled in action in Iraq and Afghanistan.

PGA professional Dan Rooney created the Foundation, served three tours of overseas military duty, and continues his significant involvement. Scholarship awards range up to $5,000 per academic year. Since 2007, the organization’s first year, thousands of these scholarships have been awarded using millions of dollars raised from the weekend event.

For more information, go to foldsofhonor.org. You can also make a direct donation to this address: Folds of Honor Foundation, 5800 N. Patriot Drive, Owasso, OK 74055. 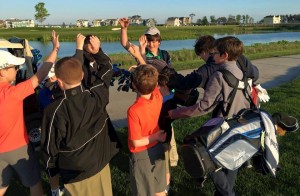 The Peninsula’s PGA Junior League gathers together during their first practice session for 2016.

The Rehoboth Beach CC Ladies held their annual Solheim Cup competition Aug. 10. The tournament pits two groups of players against each other, using a format of 6 holes best ball, 6 holes scramble, and 6 holes alternate shot for each two-player team. There were eight teams this year for each side.

Kings Creek Country Club held its Ladies’ Member Guest tournament June 24, with 108 golfers. Players dressed up and decorated their golf carts to match the day’s theme, “Around the World in 18 Holes.”

The tournament format used two better balls of four in both gross and net categories, in three flights, and also crowned overall champions.

Cape Henlopen High School golf boosters are holding a fundraiser tournament for the Viking squad Oct. 8 at Midway Par 3, beginning with a shotgun start at 2:30 p.m. The $50 fee per player covers the 18-hole scramble, along with prizes and dinner.

If you missed the Aug. 26 edition of The Cape Gazette, here’s a reminder that the Cape Henlopen Senior Center is holding its annual fundraiser golf tournament Sept. 26, at The Rookery South.

My Aug. 26 column discussed the annual NFL Scramble Sept. 8 at Rookery South. However, recent aerification at the South Course caused a switch of location for the event, to the Rookery North layout. For more information, call 302-684-3000.

The Kings Creek Ladies 18 Hole group played a Low Putts game Aug. 30. Only the putts used are added up for scoring, without handicaps.

Kathy Casey won first place in the first flight, with Jeannine Doane in second and Wendy Maclay in third. For the second flight, Pattie Mageee took first, with Debbie Grant in second and Atom Irwin in third. Sheree Davis was closest to the pin for the day.