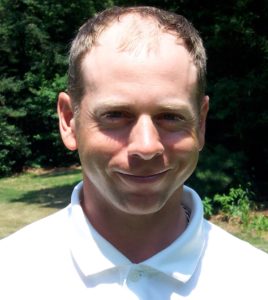 Krueger, 42, has been the teaching pro at Kings Creek for over 8 years. A 1991 graduate of Mount Pleasant High School in Wilmington, he earned a business management degree from Old Dominion University in 1996.

Krueger has won the Delaware Amateur and Delaware Open, and remains among the top 10 professional golfers in the current Delaware tournament circuit.

A few years on the lower level pro tours convinced Krueger to stay in golf, but in a different way. That led to teaching stints at places such as the Jim McLean Golf School in Florida, and the eventual attainment of his PGA Class A status.

Krueger is a longtime supporter of junior golf, and assisted both the Cape golf team and Sussex Academy in the past.

“I’m excited to coach the kids. I have my ideas on how to build up the program, and am extremely hopeful about the team’s prospects,” he said.

Krueger will be attending a meeting of parents and Cape golf boosters at the Five Points Green Turtle restaurant’s back room on Monday, Feb. 20 at 7:30 p.m., to talk about his plans for the upcoming season.

When contacted about the coaching change, Smarrelli said simply, “It was time for a change. It’s been a good ride, and I’m proud of my accomplishments.” 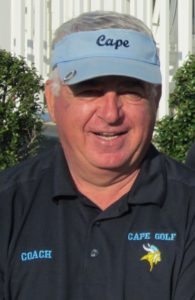 For most of his tenure, Cape’s golf team remained among the leading scholastic golf programs in the state, especially among the schools in Sussex County. The Vikings qualified for the state tournament for all but a few years of Smarrelli’s time with the kids, and several golfers went on to successful years with college golf teams.

His fellow golf coaches honored Smarrelli with a Henlopen Conference Coach of the Year award in 2014. Smarrelli instituted a booster club for the team, and that group provides significant assistance for the Vikings.

Gardner Shugart, a past president of Shawnee Country Club, died Jan. 31 at age 78. A retired State of Delaware employee, the Milford resident was active in many parts of his community, including the Milford Lions Club, the Milford Public Library, and Shawnee, his favorite golf course. Shugart served as the club president in the early 2000s.

Many years ago, Shugart joined others in starting and then running a hugely popular midweek golf league for Shawnee members. In its heyday, over 56 golfers played matches each week in spring and summer, supplemented by a gang of volunteer fill-ins.

Shugart’s impish grin matched his personality. I have a fond memory of the time he gave an award to John Eustis and me at a Shawnee league post-season dinner. He announced a new prize, allegedly earned by the players best known for being the last ones in the clubhouse after each match.

Eustis and I each received a combination flashlight/clock.

Shugart joined in the laughter as we walked to the podium for our “honors.”

I still have it, on my shelf along with other treasured golf memorabilia.

Shugart was a genuinely nice guy, and it was a pleasure to know him.

The folks at Rookery South are planning to join other Cape Region clubs in sponsoring a PGA Junior League Team.

This is a great initiative for junior golf. Kids play matches against other clubs in a scramble format, guaranteeing that each golfer has a chance to contribute toward the team’s victories.

The schedule includes four weekly practice sessions with a PGA professional, six matches against other area clubs, and free practice range use at both Rookery courses.

As with other Junior Leagues, each team member wears a special numbered shirt for their matches, just like the Little Leagues in baseball and softball.

For more information, contact Rookery Assistant Pro Brandon Laigle at 302-684-3000, or email him at bwlaigle@pga.com. You can also go to pgajlg.com, and follow the zip-code link to the Rookery South sign-up.

Lessons with the Golf Pro, on the Simulator 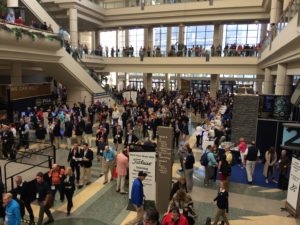 The Jan. 25 opening day crowd at the 2017 PGA Merchandise Show

In late January, I traveled south to Orlando, FL for the 2017 edition of the PGA Merchandise Show.

It’s just another example of the hard work that goes into providing a weekly golf column for our Cape Gazette readership.

In upcoming columns, I will discuss some of the interesting items I saw on display at the Show, and if and where you can find them in the Cape Region.