The United States Golf Association and the Royal & Ancient recently announced a significant proposed revision to the Rules of Golf. The two organizations want your help in adopting the final version, to go into effect January 1, 2019.

The basic goals for the initiative are to make the Rules more easily understood and applied, more consistent and fair, and to “reinforce the game’s longstanding principles and character,” according to a USGA statement on its website.

The existing Rules are sometimes a trap for the unwary, as seen in recent U.S. Opens. For recreational golfers, several proposals should make perfect sense, since they already mirror the “unofficial rules” by which millions of golfers actually play the game.

For example, “ready golf” is now encouraged when it’s safe to do so, instead of waiting for the player farthest out to make her stroke.

In competition, players could see a new Rule that sets the maximum strokes per hole at something like double par or triple bogey. On our gang’s spring trips down South, we’ve been doing that for years.

The important part of the initiative is that the R&A and USGA are seeking golfers’ input on the proposed draft changes. As they put it, “We encourage you to review the proposed changes, to try them out on the course over the next few months, and to let us know your thoughts.”

The draft changes can be seen at the USGA and R&A’s websites. The deadline for comments is August 31.

I will discuss some of these proposals in future columns.

Goldilocks and the three putters

There are two basic designs for the part of the putter that meets the ball—a full metal club, or with some form of plastic insert set into the face in the impact area.

Sometimes the plastic/polymer insert is what hits the ball. In other models, the insert’s outer facing is metal, and a polymer is set into a molded space behind the face.

The main performance difference between these designs relates to what engineers call a Coefficient of Restitution. In this case, COR refers to the amount of bounce a ball makes when the clubface hits it. A full metal putter, such as my Ping B60 putter, creates a harder, faster bounce than if I used the same force against the ball with a polymer insert putter, such as on some Odyssey models.

For most golfers, their preference for either design is a matter of feel and perceived performance. Some switch back and forth, depending on whether they are putting on a slow green (metal face) or a fast green (polymer insert).

For other golfers, the choice between these two faces recalls the dilemma faced by Goldilocks when she tried the first two bowls of porridge in the bear’s cottage. Instead of too hot and too cold, however, these putters are too hard or too soft.

I talked with Sentio Golf president Jim Varney at the PGA Merchandise show. Varney and a friend developed a middle-ground solution between these two options that may appeal to golfers seeking to fine-tune their putting game. 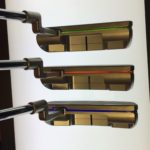 Sentio’s putters feature a polymer injected between the face and the back of the putter, in three different formulations.

At first glance, the Sentio putters look like a straightforward blade design, with a metal face, heel-toe weighting, and an offset hosel connected to the shaft. Look closer, however, and you can see the difference.

As Varney explained, a rubberlike polymer provides the only connection between the putter face and the rest of the club. The TPE polymer is injection molded into the space between the two metal pieces, bonding them together.

After a lot of experimentation, the design team came up with three formulations that provided three different CORs—Green/Soft, Red/Medium, and Blue/Firm.

Each model’s metal face is grooved horizontally, and a perpendicular alignment aid helps center the ball on the putter. The face has a 2-degree loft, and the shaft is set at a 72-degree angle.

The putters retail for $299, and are available in 33-, 34-, and 35-inch lengths at the company’s website and an ever-increasing number of club fitters.

For as much as most golf apparel companies rely upon some form of polyester man-made fabrics, others insist on following a different path.

The family-run tasc Performance company does just that, with their proprietary blend of cotton and bamboo.

At this year’s PGA Merchandise Show I talked with President and co-founder Todd Andrews, who explained the company’s approach to clothing technology. 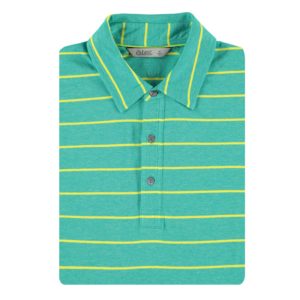 tasc Performance golf shirts are made with a blend of cotton and bamboo.

Tasc found a way to use Moso timber bamboo plants from China, in what they call the BamCo® process. The inner pith of the bamboo is gathered, treated, and regenerated into a form of rayon. When blended with cotton, the resulting mix provides moisture wicking, UPF 50+ sun protection, and anti-odor elements, without the additional chemical treatment that some polyester fabrics require.

Much of the work to build and knit the fabric is done in India with a long-standing partner with tasc. The Andrews family remains in Louisiana area, with their research and marketing work at their offices in Metarie. The flagship tasc Performance store is on Magazine Street in the Uptown part of New Orleans.

The fabric feels remarkably soft to the touch for both the shirts and pants I was shown. There’s also a bit of stretchiness to it that wouldn’t be there in an all-cotton weave. Andrews said the fabric is quick drying because of its hydrophilic qualities. As he explained it, moisture spreads throughout the fabric and therefore evaporates faster than other clothing, where the moisture can puddle.

Andrews said they have a licensing arrangement with PGA Tour Shops, and tasc clothing will be available at the upcoming Players Championship this spring. They have a busy logo service for clubs and companies.

Tasc clothing lines are also found at resorts and high-end golf pro shops, such as Pebble Beach and Hilton Head, as well as their online store.