Cape’s Michael Bollig tees off during the April 12 tri-match against Milford and Concord High Schools.

Matt Zehner’s 42 earned him the medalist honors for the day, while Nolan Brown and Dane Palmer tied for second best Viking with their 45s. Michael Bollig completed the team scoring with his 46.

The Vikings then hosted the Milford High Buccaneers and Concord High School Raiders in a tri-meet April 12 at Rehoboth Beach Country Club. Milford’s Kyle Strassle won medalist honors with his one-over par 37, but Cape won both of its matches, 173-197 for Milford, and 173-185 for Concord. 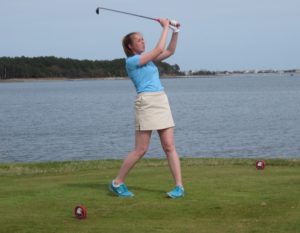 Maddie McGreevy watches her ball fly toward the 19th green during the April 12 match, her first varsity start for 2017.

Palmer’s 41 led the Vikings, followed by Zehner’s 42, Brown’s 43, and Bollig’s 47. Sophomore Maddie McGreevy shot a 50 in her first varsity start for the year, tying Reed Jones.

Krueger said, “It was another great team effort. The competition for playing in the matches is getting tougher for the coaches to decide on!”

Dave Hambly appreciates the fact that local businesses working together can do very nicely for each other.

The Lewes area resident enjoyed a long career in direct marketing and other ventures. He also captained the Penn State golf team in the mid-60s, and had a successful run in amateur golf in New Jersey and South Carolina.

Hambly is now putting the finishing touches on his new business, giving golfing visitors and local golfers more opportunities to enjoy the benefits of the Cape Region.

He made an arrangement with The Rookery that provides an immediate chance for a nice prize for a good tee shot on the South Course’s ninth hole, along with a series of discount offers for local businesses.

Once the golf season begins in earnest, Hambly or one of his representatives will greet the golfers at the ninth tee, a par-3 hole normally set at 115 yards from the white markers.

For $10, players have a chance to win an Odyssey putter by hitting their tee shot within a grip-length of the hole. Even if they don’t quite make that goal, all is not lost. They can fill in a form for an eventual drawing for the putter, taken from the other participants who didn’t win in the last 45 days or so.

The golfers also receive several other items: a $10 certificate toward a Rookery golf shirt, $10 coupons for the Matt’s Fish Camp and Bethany Blues restaurants near Lewes, an additional $10 coupon from Waves Car Wash near Westcoat’s Corner, and a $10 discount toward a round of golf at Rookery North.

Tee box greeters offering some kind of deal are fairly common at tourist-oriented golf destinations in Myrtle Beach, SC and elsewhere. What’s nice about Hambly’s version is that his coupons and discounts should appeal to local golfers as well as visiting players.

Hambly gave his conservative estimate that about 15,000 golfers will be exposed to this opportunity during the busy season. He expects the deal will be well received by local players, as well as those coming to play here as part of a package tour or family vacation.

Hambly is in discussions with other golf courses in Sussex County, with the coupons targeted to the dining and other options in their immediate areas.

Men’s fashions tend to be cyclical. In my closet is a 40-year collection of neckties that prove the point.

Two young men, childhood friends since their days on the Upper West Side of Manhattan, have recognized this fact and are trying to take advantage of it.

Criquet Shirts was one of the smaller companies to have a booth at this year’s PGA Merchandise Show. Its employees were doing a nice bit of business taking orders for the upcoming season when I sat down with co-founder Billy Nachman.

He and co-founder Hobson Brown began Criquet in an Austin, TX garage, and started slowly with an online store. They’re now enjoying their growing presence in green grass pro shops and other retail outlets, in addition to their web site (criquetshirts.com). 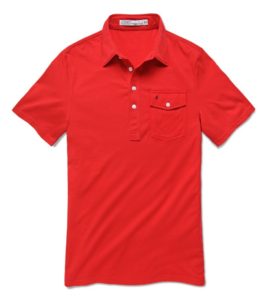 Nachman said he and Brown grew up with a prep school/golf aesthetic, based in the late 70’s and 80’s. They have brought back some of the fashion elements of that era, with a modern sensibility.

The shirts have a 4-button placket, running a bit deeper down the chest than more recent trends have done. They also use hard collars instead of the knit variety. To combat what Nachman called “bacon collar,” Criquet shirts also come with removable collar stays.

Collar stays work well, but tend to disappear along with single socks during laundry day. With Brooks Brothers in the Tanger Outlets, however, replacing lost stays in the Cape Region is not a problem.

Brown and Nachman also have a sense of humor about their wares, notably in the names they’ve given their shirts. You’re My Boy Blue (Will Farrell’s Old School) and The Bushwood (from Caddy Shack) are among the styles offered in their Players Shirt line, along with Spruce Lee, Panama Red, and The ’86, a bright yellow solid similar to what Jack Nicklaus wore in the Masters final that year.

Criquet uses 100% organic cotton. For sizing purposes, they suggest their Medium size would fit a 5’11”, 180-pound man. The Players shirt retails for $75, with the long sleeve version available for $95 SRP.

The Kings Creek Ladies 9 Hole group played its first tournament of the season April 12, using the Tee to Green format that only counts strokes until arriving on the green.

Judy Wetzel won first place in the first flight, with Deb Ward in second and Winnie Sewell in third.

Amy Micholas won the third flight, with Joanne Yurik in second and Barbara Morales taking third. Joan Repetto finished closest to the pin on the 11th hole, at 9 feet 9 inches.

Sue Brady won the front nine, and Linda Townsend won the back nine, but Debbie Quinn won the 18-hole total.