The Cost of Touring

Avid golf fans might not realize how much is at stake for most of the professionals on the LPGA Tour.

At the top end, where TV coverage is concentrated, the battle is not only for the title, but also for the large payouts for LPGA favorites such as Lydia Ko or Lexi Thompson. An LPGA winner’s check can be well north of $200,000—similar to the PGA Tour in the years before Tiger Woods, whose televised exploits helped create the now-common million-dollar paydays for the winners on the men’s tour.

For many LPGA touring pros, however, playing well enough to make the cut and maybe finish among the top 25 that week is the real goal. Playing on tour has its costs, and too many missed cuts also cut deeply into the bottom line. An LPGA golfer’s net annual “salary” on tour can be surprisingly modest, and far below what most fans might assume.

Of course, those are the gross totals–once the cost of touring is deducted, the money shrinks considerably. 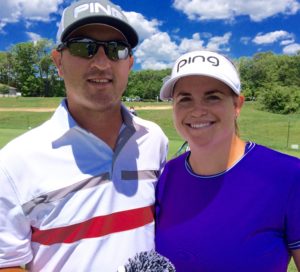 LPGA golfer Jackie Stoelting (r) with her husband Travis (l), who is also her caddie and instructor

Jackie Stoelting is fully exempt on the LPGA Tour this year, graduating from the 2016 Symetra Tour. The 30-year old played the LPGA in 2015, but lost her card, with only a few cuts made.

When the 2017 ShopRite LPGA Classic presented by Acer began on June 1, Stoelting was in 88th place on the 2017 list, and played well enough to make several cuts. However, she admitted she was pressing a bit much on the weekends, and hadn’t taken advantage of the opportunities as much as she hoped.

Stoelting described her own cost of touring, some of which puts her at an advantage over other pros. She benefits from being fully exempt, which means she can play in nearly every tournament from January through September.

However, playing in the six season-ending, limited field Asian Swing tournaments requires a high position on the money list. Stoelting and most other LPGA players therefore have to make their money well before then to keep their exempt status.

Her husband Travis is also her caddie and golf instructor. Regular caddies on the LPGA typically are paid $1,200 to $1,500 per event, often supplemented with a percentage of the payout. Travis was an assistant club pro when she started out on tour. They quickly decided caddying for Jackie made far more sense than paying someone else more than Travis’s club job.

Travis continues to give lessons at Meadowood Golf & Tennis Club in Fort Pierce, FL, where they are also members. The Stoeltings appreciate the club’s support in the form of free membership, which provides access to the range and playing time. Jackie knows other players who don’t have that benefit.

Note: This is part one of a two-part series.

Devin Sanders won the Robert McCurry Award, named after a founder of the Fund and a great friend of junior golf. The Caesar Rodney graduate will go to the University of Delaware, and received $5,200 for the first year, up to $20,800 total.

Red Lion Christian Academy Zachary Barbin of Elkton, MD won the James Powell Award. He will attend Liberty University, and received $3,800 for first year, up to $15,200.

Andrew Brown of Charter School of Wilmington will be going to Villanova, helped by an award of $2,500 per year, up to $10,000. Evan Brown of Kennett High School, PA will attend Loyola, receiving the same scholarship award.

Matthew Zehner, a four-year player on the Cape Henlopen High School golf team, will be going to Penn State University’s main campus. The Fund awarded him $2,000 for the first year, up to $8,000.

The DSGA runs a major fundraiser tournament in October at Rehoboth Beach Country Club as its main source of proceeds. Scholarship winners demonstrate high academic achievement, community service, and a love of golf.

Hope Lavachia won closest to the pin on the 13th hole.