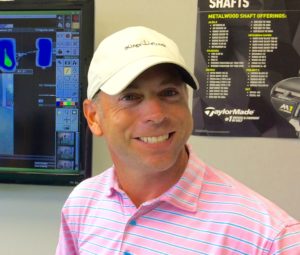 Chris Krueger has an upbeat attitude about his recent performance in the 2017 PGA Club Pro Championship, held in mid-June at the Sun River Resort in Oregon.

The head of instruction at Kings Creek CC and head coach of the Cape Henlopen High School golf team missed the 36-hole cut by a single stroke. He posted a 2-over par 73 in the first round on the Meadow Course and a 3-over par 75 on the Crosswater Course.

“I had a great time,” he said. “I felt exactly equal to anyone else out there.”

He reached the Oregon resort in time to play a practice round on both courses, which he described as very tough. “On the Meadow Course, it felt a bit like playing the 12th hole [Kings Creek’s famously difficult, narrow par-5] on each hole,” Krueger said. Krueger also said the greens ran fast, about a 12 on the Stimpmeter.

Despite the courses’ challenges, Krueger played well both days, with 5 birdies and a raft of pars. Unfortunately, two double bogeys, one each round, took him out of the running.

“After 28 holes, I was still only one-over, and then made a stupid double. I hit into fescue, got out of there, and then three-putted once I made the green,” he said.

Krueger played well in a pro event in Burlington, NJ the week before the Club Pro, and said that also helped with his preparations.

“Overall, [the Club Pro] tournament gave me lots of confidence going forward. I definitely need to keep working on my short game,” he said. This was Krueger’s second time competing in this event, the biggest potential event on the PGA club professional calendar, and he hopes to return to it in the future.

In a July note to the Kings Creek membership about his Club Pro Championship experience, Krueger made a few more points, such as:

“Short game is half the battle and an important half.
Nobody enjoys 3-4 foot putts to save par or bogey.
Big muscles always work better than small muscles.
Practicing good habits builds confidence.
The mind can wander and often does!”

Those are all good takeaways. I’ll bet Krueger finds a way to use this experience to help the Viking golf team next season.

There’s been a big drop in putter sales over the last decade, according to Vikash Sanyal, CEO of Brainstorm Golf of Escondido, CA. He should know.

The young entrepreneur had stints at Odyssey Golf and Never Compromise before starting off on his own.

When we talked at the 2017 PGA Merchandise Show, Sanyal said it’s no mystery why the sales numbers have fallen.

One of Sanyal’s putters is a good example. The Happy Putter Tour Model retails for $350, and is the most adjustable putter I’ve ever seen. Using a wrench, golfers can change the loft, the lie position, the shaft offset, and the putter’s weight—and switch the same putter from right-handed to left handed. It’s offered in two basic designs, with either stock or custom shaft lengths ($20 extra).

As he said, no one makes an impulse purchase of a golf club for over $300. At around $130, however, a golfer might just take a chance.

Naturally, you get what you pay for. The new Happy Putter permits golfers to change the putter’s weight and the alignment guide, but doesn’t have the other adjustability elements of the Tour model.

The weight part comes with screw-in steel or tungsten pieces at 15 or 30 grams. The adjustment guides come in three styles, and screw into place on the underside of the putter.

It’ll also be interesting to see if Sanyal’s market assessment is correct.

The Kings Creek Ladies 9 Hole group played a Flag Day game July 5, in which each player stays on the course until she reaches her handicap score. She places a flag at that spot. If she goes past the 9th hole, she keeps going on the putting green.