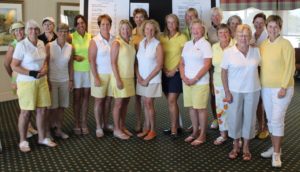 The Children’s Beach House in Lewes was the other winner for the day, benefiting from a $2,500 donation from the participants.

Cellist makes first hole in one 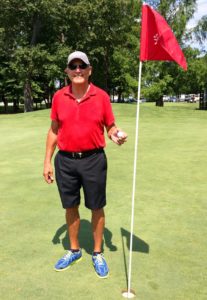 Tony Gizzi made his first hole in one July 11 at the 104-yard par-3 9th hole at Rookery South, with a pitching wedge.

Tony Gizzi is a professional cellist living near Lewes. He owns and manages the Shrewsbury String Quartet, a popular choice for weddings, corporate events, and other venues in the Cape Region and beyond.

He’s also an avid golfer, and made his first hole-in-one on July 11 at the 104-yard 9th hole at Rookery South, using a pitching wedge.

“I tracked it the whole time. The ball bounced once and rolled right in,” Gizzi said.

It looks like more than just Gizzi’s cello is in tune.

A recent column noted that three members of Rehoboth Beach CC made three holes in one within two weeks of each other.

The magic apparently is continuing.

Fred Hertrich used his pitching wedge on the 121-yard par-3 fifth hole for his ace on June 17.

A few years ago, I asked a friend to shoot a video of my swing with his smart phone.

It was not a pretty sight.

With the help of lessons from Rookery golf pro Kyle Deas and a lot of practice, my swing has noticeably improved. However, except for lessons I have not been videotaped since then. 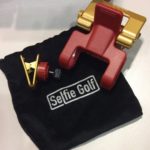 And thanks to the new Selfie Stick, now I don’t have to bug one of my friends to come to the range for another video session.

At the 2017 PGA Merchandise Show I met Luis Kim, CEO of Selfie Golf USA, of Los Angeles, CA. Kim is a golf instructor, and has also caddied for PGA Tour pro John Huh.

Kim said the inspiration for his Selfie Stick came from watching golfers on the range. He saw folks trying to set up their smart phone on top of their golf bag, or on top of a bench, all in the effort to record their swings. He figured there had to be a better way. The new Selfie Stick was the result.

The device is an ingenious set of clips that attach to a smart phone, an alignment stick or similar “post”, and the golf bag.

The Selfie Clip is first attached to an alignment stick. A separate, adjustable Bag Clip is then secured to the top of the golf bag, after first setting the bag at the spot where the video will be shot. The last step attaches the smart phone to the Phone Clip, and aims the phone in the best place for the video shoot. That’s it.

This is one of those inventions that make so much sense when you see it that you wonder why it hadn’t been developed before. Several touring pros use it, including Danny Lee on the PGA Tour and Jenny Shin on the LPGA tour.

The product retails for $40 or so, and is available online at the company’s website.

In this format, golfers play the course until they use up their handicap strokes, beyond the course’s par -72 total. For every handicap stroke that’s not needed to finish the full 18 holes, plus strokes are awarded.

Harvey’s 68 converted to a +8 total, while Michael Stadler’s 86 earned him a +7 for second. Peggy Roca tied for third with Steve Anderson at +6, while Lee Turek and Ralph Desena tied for fourth at +5.