A golf course may look like a natural setting, but a lot of work is required to create that illusion.

Rehoboth Beach Country Club is now busy with a major renovation project that with any luck will be completed in time for the 2018 golf season.

Mike Maney is the course superintendent. He is working closely with ISI Irrigation and consultant Paul McMahon of Hydro Designs on a series of irrigation and related improvements.

“The existing system was put in around 2000-2001,” Maney said. “We’ve been experiencing several failures of the pipe fittings, especially in the last 4-5 years. The flooding presented a serious turf loss risk, and dealing with those problems at places like the 10th and 18th fairways takes some of my top guys from their other work.” 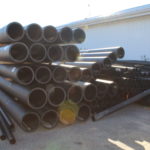 Irrigation pipes stacked near the RBCC cart barn, ready for installation as part of the club’s major renovation project.

After gaining approvals from the RBCC board and its membership, work began in earnest on the multi-stage project Oct. 10. “I’m grateful we were able to get started when we did, because the work is so weather-dependent. Since then we already lost 5 days because of several inches of rain.”

The project replaces all of the elements of the existing RBCC irrigation system, including the pipes, pumps, control systems, and electrical components. According to a 2015 USGA Green Section study, these projects can easily cost $1-2 million. Given the scale of the RBCC project, that estimate makes sense.

Maney said they are installing new fans at the 12th, 13th, 14th, and 16th holes. The turf at these locations is affected by the nearby forest canopy and adjacent homes. The fans provide air circulation for better turf health. In addition, the project includes a new washing station at the club’s maintenance facility for the carts and mowers and other equipment. New well pumps and motors are also slated for installation, along with a new maintenance building.

The new system will install new snap valves for hose systems adjacent to the greens complexes. Maney said the valves and hoses give his staff the ability to target water deliveries in the amounts and locations where it does the most good.

The irrigation control systems are from Toro. Maney and his staff will be able to use iPads on site to tweak the pumping as needed. During the winter Maney is to complete a training course in Pennsylvania on the new system.

“What I really like is that we can do individual sprinkler shut downs if there’s a problem. With the current system we had to shut down 4-5 holes at a time, which made it difficult.”

The sprinkler controls are also far more precise than the existing arrangement, and access to the sprinkler system elements is more direct. As Maney explained, if a valve issue or other problem develops, the staff can lift off the sprinkler head and reach all necessary parts directly underneath it. That’s a much better arrangement than the current requirement to dig up the turf for 4 to 5 feet around the head.

In addition, each sprinkler can be adjusted to spray water at set angles, from 10 to 360 degrees. Maney said this level of control allows him to set precise irrigation goals for the rough, the fairways, or the greens. As he explained, this also means he can take into account the slopes or other turf conditions that affect how the water is received by the turf. “We should use a lot less water than we had with the existing system, and save a lot of money on the water and the chemicals,” Maney said.

To help with the daily irrigation decisions, the project includes a new on-site weather station. At the time of the interview, Maney had not decided where the best location would be for it. Together with hand-held moisture sensors, the weather station’s data will help Maney adjust his irrigation system to the RBCC microclimate.

The 2015 USGA Green Section study noted, “The ultimate goal is to have an efficient and dependable irrigation system that serves the needs of the golf course for many years into the future while conserving precious financial and water resources.” Considering the age and existing difficulties with the current RBCC irrigation system, the new project should bring the club much closer to that goal.

Congratulations to Doug Buchanan and Steven Tucker for their recent holes in one at the par 3 14th hole at Rookery South. Buchanan made his ace Nov. 27 with a 6-iron, while Tucker made his hole in one Nov. 28.

Not to be outdone, apparently, Hank McCann used his 7-iron make another hole in one Nov. 29 on the par 3 15th hole.

He might have a point, but I don’t think so.