Masters Week at The Reserve Club at Woodside

Troon is a major operator in the golf and club management business for public and private courses worldwide. In the Cape Region, the Troon Privé  division manages The Peninsula as well as Bayside, while the Troon Golf division oversees the 27 holes at the Bear Trap Dunes public layout. 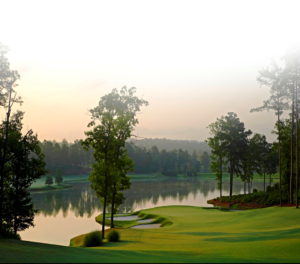 The third hole at The Reserve Club at Woodside, in Aiken, SC.

“It’s our busiest week of the year, by far,” said Director of Golf John Keller. When I showed up mid-morning on the Tuesday of Masters Week, the place was bustling nicely. The extensive practice range was nearly full, although a few stations separated British Open winner and Golf Channel analyst David Duval from the amateurs.

Duval was working with his swing coach. While the other golfers were pleasantly surprised to see Duval, no one sought to break up his session with an autograph request or two. As usual, however, the sound of a PGA Tour pro hitting golf balls was noticeably different.

The Club offered several levels of playing packages from March 31 through April 9, the Monday after the tournament ended. I signed up for the Club package, which covered the range, cart, a round of golf at the par-72 Nicklaus Course, and lunch. The staffers were unfailingly polite and professional, and quickly helped me become oriented to the range, dining area, putting greens, and pro shop.

I joined three Australians from Sydney on what they described as a “bucket list” golf trip to both Augusta and Las Vegas. Austin Chapman, his son Tobi, and Greg Coure had already played the TPC course and Wolf Creek in Vegas before continuing east to Augusta for a group vacation arranged by a friend. We appreciated the bright, sunny day in the mid-80s, with the azaleas and dogwood in bloom.

Tobi said he carried a 4 handicap and he played to it. It is always fun to watch a very good golfer work his way around a course. Austin was still recovering from a knee replacement, so he limited himself to a few drives. Coure and I had our occasional struggles, but he remained a pleasant golfing companion all day.

The Nicklaus Course is very hilly, especially for Cape Region flatlanders. For some blind tee shots a bit of pre-shot reconnaissance is a very good idea, especially if you’ve never before played the course. With those exceptions, the challenges presented were easily seen, if not always easily handled. The winds were fairly strong and swirling, often calling for two extra clubs, with elevation changes adding to the difficulty of deciding which club to use for a given approach. Tobi and I came up short of the greens by a yard or two on several holes, usually leading to one-putt pars for him and bogeys for me.

The Bermuda grass greens were very fast but not nearly as grainy as I expected. The main challenge was to adjust my putting technique from wintertime Cape Region greens to the slicker conditions. It became easier as the round progressed.

We had a great time. The Aussies were scheduled to begin their Masters experience the next day, so at the post-round lunch we chatted about what to expect. A miscommunication about Augusta National rules against cell phones on the course meant they needed to find a place to buy digital cameras for the practice round and the Wednesday par-3 contest.

Troon Privé made a smart business decision to open The Reserve Club at Woodside to public play during Masters Week. They might want to consider opening up other courses during the same period, as part of an expanded marketing campaign. One day of public access, celebrating the Masters, could be hugely popular at a course such as The Peninsula.

The Cape Henlopen High School golf team went cross-county April 24 to the Hooper’s Landing golf course, and won both matches in a tri-meet contest. The Vikings won 173-251 against Laurel and 173-264 against Seaford.

Dane Palmer won medalist honors with a 38, highlighted by consecutive birdies on the fourth and fifth holes. Nolan Brown finished second for Cape with his 44. Saxon Kalb took third place among the Vikings with his 45, while Ben Skelley completed the team scoring with his 46.

Mulligans Pointe is starting its 2018 golf league May 2 for a summer season of nine-hole matches. League openings are available for members and non-members. For more information contact the pro shop at 302-856-3363.