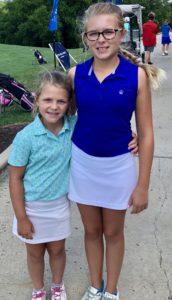 Sawyer Brockstedt of Rehoboth won her age group (12-13) in the Drive Chip and Putt local qualifier event July 18 at White Clay Creek Country Club. Last April she tied for 4thplace in the 10-11 girls’ group in the national DCP Championship at Augusta National. This time Brockstedt made the highest point total of her DCP career, with a first place in both driving and chipping.

Her sister Hudson also qualified for the next DCP level in the girls 10-11 category. Her 97-point second place finish was only 6 behind first place winner Meredith Finger. Hudson tied for first in putting and took third in chipping.

The next DCP hurdle for the sisters is the subregional Aug. 14 at Applebrook Golf Club in Malvern, PA.

September and October are prime months for charity golf fundraisers in the Cape Region. Here are a few more.

The $100 entry fee covers the golf, player gifts, a buffet dinner, and prizes. Non-golfers may attend the dinner for $30. Registration the day of the event begins at 11:00 a.m., with a shotgun start for the scramble format at 1:00 p.m.

The Milton Volunteer Fire Department and Ladies’ Auxiliary are holding their annual Fall Golf Outing Sept. 19 at The Rookery South Golf Club in Milton. Registration and continental breakfast begin at 8:00 a.m., with a shotgun start at 9:00 a.m.

The $85 entry fee ($320 for a foursome) includes the breakfast, beverages on course, golf with cart, lunch, and awards.

The Delmar Police Department is holding their Blue Line Classic Golf Tournament Sept. 29 at Mulligan’s Pointe GC, with a shotgun start for the scramble event at 10:00 a.m.

Thirty-two four-person teams can participate, at $320 if registered by July 31 or $360 if registered after Aug. 1. The fee covers the golf, a t-shirt, lunch, and a six-pack of adult beverages per player.

The Department is seeking sponsors and raffle item donations. For more information, contact Cpl. Kevin McCahill of the Delmar PD at Kevin.mccahill@cj.state.de.us.

The event supports the new Home of Hope, a new women’s shelter for those struggling with addiction and substance abuse. The 90-acre facility off Rifle Range Road is scheduled to open this fall with two dormitories, a multi-purpose sanctuary, and an administrative office with classrooms.

The $125 entry fee covers the golf and cart, prizes, and a buffet luncheon.

The church is seeking additional sponsors as well as players. For more information call Union United at 302-337-7409.

The annual Clothing Our Kids tournament will be held this year on Sept. 24 at The Peninsula in Millsboro. All available playing spots are sold out, but the organizers are still seeking sponsor support. For more information, contact Kathleen Blouin at kblouin@outlook.com or 302-236-9825.