Whitby qualified for the national tournament by shooting one over par Aug. 21 at Brookside Country Club in Macungie, PA.

The Mid-Am is scheduled for Sept. 22-27 at Norwood Hills Country Club in St. Louis, MO. The top 64 players in the 132-player field from the first two days of medal play go on to a match play format to determine the eventual winner.

A few years ago I had a very focused golf lesson with Rookery North head golf pro Kyle Deas. It was the first time I experienced the benefits of a launch monitor. Deas used it to recommend the optimum loft for the driver he also recommended.

The process was well worth the modest effort. Thanks to the lessons and the launch monitor fitting, my drives traveled 20 to 30 yards longer than before. That in turn led to shorter irons into the green and a lower handicap.

That experience is why I now write at least one column each year recommending fittings with a launch monitor and knowledgeable club pro.

At the 2018 PGA Merchandise Show in Orlando, FL I met Alex Trujillo, a USA Sales Manager and Application Specialist for Flight Scope. The Army veteran and graduate of a professional golf management school had an internship with the company, and that led to six years of full time work with Flight Scope.

Trujillo showed me two new models at the high and low end of its offerings.

The X3 is their top line product, retailing for $14,995. Trujillo says it offers what they call “Fusion Tracking.” He said, “It uses Doppler 3d radar tracking technology, fused with high speed imaging. For wedge shots, the combination produces much better data.” Trujillo said the system also works well with chipping and putting practice. The built-in camera also does in-line video recording, which is also useful for work on alignment issues. 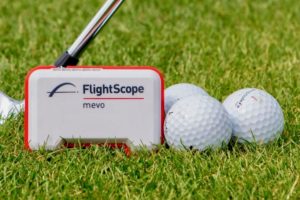 The 50 data parameters collected and displayed by Flight Scope’s X3 for each swing may be a bit much for the amateur golfer. When used correctly by the club pros, however, the data should be useful in finding ways to reach each golf student with the information they need in order to improve. These include face to path angles, dynamic loft at impact, the low point of the swing, the vertical descent angle of the ball, and many more.

Placed behind the golfer on the range, as with other monitors, the MEVO can merge with the golfer’s smart phone camera and provide instant feedback in both data and video. It can also provide data-only collection, with the data stored in the cloud for the app that comes with the device.

The MEVO’s club and ball data parameters are more limited than Flight Scope’s other products, but still useful. They include launch speed, smash factor, carry distance, and launch angle, together with four other data points.

The product had a soft launch into the market in 2017, according to Trujillo, but he said “We’re going to start pushing it now.” He said they focus their marketing efforts on the green grass shops, where the pros are.

The newest iteration of the Rules of Golf goes into effect Jan. 1, 2019. The United States Golf Association recently published two digital versions of the Rules. The Player’s Edition is a user-friendly edition organized by 10 topics, with a “Purpose of the Rule” explanation and diagrams and charts for better comprehension. The full Rules of Golf book looks like past editions. A detailed Official Guide is also available, targeted toward golf administrators and competition committees.

Pauline Porter was closest to the pin on the 15thand 19thholes.