One of the best-known names in Delaware golf is taking the helm for the Delaware State University women’s golf team.

Richard “Rick” McCall, Jr. assumed his new responsibilities for the Hornets earlier this month. Most recently he was the head golf professional at Wild Quail Golf & Country Club in Wyoming, as well as the club’s junior program coordinator. 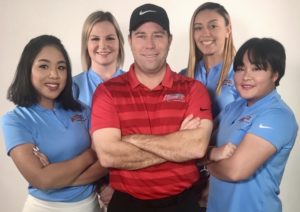 His father, Rick McCall Sr., is a Hall of Famer as a longtime golf professional in Delaware, especially noteworthy for his successful efforts promoting junior golf at Maple Dale CC in Dover. As Dover High’s golf coach, the elder McCall helped his teams win a long string of state championships.

The junior McCall won the states while at Dover High. He played on scholarship for the Division I University of Tennessee at Chattanooga golf team, graduating there in 1995.

His own background in professional golf includes his 15 years at Wild Quail, and also work in Florida for noted golf teacher Jim McLean. McCall also had a long stint at the assistant men’s golf coach for Wesley College in Dover, and was head coach there from June 2017 to June 2018.

Women’s golf at the collegiate level usually relies on five players or six players to compete, using the top four scores in each round for the total team score. One golfer transferred last fall from Delaware State, and four golfers remain for the spring season’s tournaments.

Panarisa Chinsuti is from Bangkok, Thailand, and transferred to DSU from Midwestern State University in Wichita Falls, TX. Kanyakorn Chothirunpanit is also from Bangkok. This is her third season with the Hornets. Cilatlipaz Butler is from Burtonsville, MD, and is a sophomore at DSU. Erin Kopinak is from Wheatley, Ontario, Canada, and transferred to the Dover campus from Alcorn State.

Despite the limited team size, McCall is comfortable with his team’s prospects. “They will have to have a little grit, a little toughness – no one can drop off” during a tournament, he said. “I met them all last year at Wild Quail, and got to know them pretty well. They’re wonderful. So far they’ve been great and are eager to learn,” McCall said.

One of the differences between high school and college golf is the workout regimen. McCall said Delaware State has personal trainers who are dedicated to three or four sports apiece. The golfing Hornets work out on a regular basis with their designated trainer’s help. McCall has dropped in on their workout sessions and is impressed. “These things help develop a team environment and camaraderie,” he said.

McCall has to hit the ground running, as this is the primary season for recruiting golfers to the university for the next year. “I’m already in the middle of that right now,” he said. Some promising current prospects may be coming from Thailand and South Africa. He is also looking around the Mid-Atlantic area, including Philadelphia. “I’ve started looking locally, and gotten the word out,” McCall said.

It’s not at all unusual for collegiate women golfers to come to the United States from foreign countries, especially when there’s no such thing as college golf in their own countries. Attending an American university and playing golf is a great way for talented foreign juniors to hone their skills and see if they have potential for a career in golf, either on tour or as a club pro.

In the absence of native talent, ambitious young women from elsewhere will fill the available slots, as they should.

In the DSU press release announcing McCall’s appointment, Director of Athletics D. Scott Gines said, “Rick logged 17 seasons as a collegiate assistant golf coach in Delaware, identifying talent, developing high performers, and enjoying championship and graduation success.  His passion and plan for building a successful Hornets’ women’s golf program stood out to me, and I am confident that his instinct for identifying talent and his ability to develop consistent tournament performers will provide a long-term foundation of stability and success for Delaware State.”

McCall said he would love to have Delaware junior golfers consider DSU as a potentially great place to obtain a good education and play Division I golf. The State of Delaware has never been a major source of college women’s golfers. Nonetheless, compared to almost any other collegiate sport, scholarships for women’s golf are not difficult to obtain.

With two Division I programs at UD and DSU, young women playing golf in Delaware should consider seizing these local opportunities.

Experienced golf coaches such as McCall are more than willing and able to work with young American women, taking them from bogey to much lower handicap levels during their time at school. As he said in our interview, “You give me a golfer who can shoot 90 and I can build on that, developing her skill set and finding ways to help her improve.”

The Hornets’ spring schedule begins at the Naval Academy with a tournament set for April 6-7 at the famous William Flynn-designed Navy golf course. Other tournaments are scheduled for later that month.