The Indian River High School golf team is much improved this year, and earned a 6-1 record going into the April 18 match against the Cape Henlopen Viking squad. The Indians added to their win column just before spring break, defeating Cape 172-201. 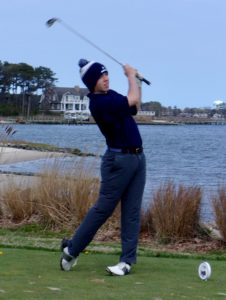 Reed Jones had the best score for Cape with his 46. Dane Palmer shot an uncharacteristic 48. Ben Skelley posted a 52, while Nick Vitolo’s 55 finished the Vikings’ scoring on an off day for the team.

Viking head coach Rob Harrod said, “Mama said there would be days like this! IR played well and took advantage of home course knowledge. The greens were lightning fast and the fairways really firm. We really struggled with that and they didn’t. It got really windy and all of their players handled it and we didn’t. We are a much better team than we showed today.”

On April 16 Cape hosted Lake Forest and won, 177-268. Palmer won medalist honors with a 4-over par 39. Skelley posted a 45 and Jones shot 46. Quinn McCullough made his first varsity contribution to the team score with his 47.

Sussex Academy hosted Sussex Central April 16 at Bear Trap Dunes and set a team scoring record for the season with a 159-208 victory. Hannah Lydic won medalist honors with her 34.

Keeping it real by fighting the fakes

When folks plunk down several hundred dollars for a single club or $50 for a dozen golf balls, other people can become inspired – and not in a good way.

The U.S. Golf Manufacturers Anti-Competitive Working Group came into being because too many of those other people were cheating their customers and taking away market share from the real companies.

At the 2019 PGA Merchandise Show I chatted with Group spokesman Jason Rocker, who works out of downtown Philadelphia, to find out what changed since I last wrote about this issue several years ago.

“We just passed our 2 millionth confiscation in October,” he said. “We continue to work on two ends – educate the consumer and try to catch the counterfeiters.”

Rocker said the continued growth of online sales increases the risk of buying fakes. “When we can, we work with the third party online sellers such as EBay to point out the problem sellers and have them closed out,” he said. “Much of the fakes come from China, especially the clubs, but Chinese law enforcement has been cooperating with our lawyers and investigators in that country.”

He also said they have boosted their consumer education efforts. “We do as much as we can on the consumer level.” The Group’s website, keepgolfreal.com, includes useful information on how to spot a fake, how to report one, and current information on the scale of the problem.

As we discussed, part of the Group’s challenge relates to the economic calculus used by the very casual golfer, who may only play a few times per year. Equipment costs for well-made clubs are what they are. The temptation to buy cheaper alternatives is out there, because some folks may just not care about buying fakes to save money.

These companies are pretty feisty in challenging each other over patents, as shown in the months leading up to the recent lawsuit settlement between PXG and TaylorMade. There is no reason to think they would be any less combative when it comes to outright counterfeiting.

The Working Group has remained busy for the last 15 years. They have no incentive to quit, and every incentive to combat intellectual property piracy as hard as they can.

The Kings Creek Country Club 18-Hole Ladies Golf Association held its first competition of the season April 18. The group played Baker’s Dozen, where the scores for the best 13 of 18 holes are totaled for each player.

Sheree Davis won the first flight, with Winnie Sewell in second, Jean Chlastawa in third, and Wendy Bunce in fourth.

Joanne Yurik won the fourth flight, with Barbara Hines in second, Carolyn Ortwein in third, and Carol Loewen in fourth. Yurik also won closest to the pin for the day.