The Delaware State University women’s golf team traveled to Annapolis, MD for their first spring tournament of the 2018-2019 season. The young Hornets took fifth place in foggy conditions in the April 14 second round at the Navy Invitational at the Naval Academy Golf Course. 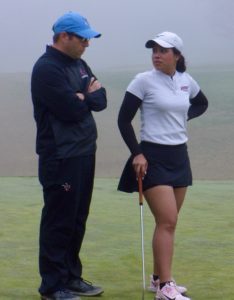 The most recent Hornet golfer only started playing golf in early February. College competition rules required a fifth golfer for the team. DSU volleyball player Caroline Rakoski agreed to fill that role. She struggled, but head coach Rick McCall, Jr. said he was pleased with her progress.

Only two members of the Seaford High School golf team came to the April 10 match against Cape Henlopen’s Vikings at Rehoboth Beach Country Club. Conference rules made this a Blue Jay forfeit, adding another victory to Cape’s season.

Vikings Dane Palmer and Saxon Kalb won co-medalist honors with a pair of 40s. Kalb made a nice little fist pump after his birdie at the ninth hole. Reed Jones shot a 46, and Tommy Burn completed the Cape scoring with a 50 in his second round of varsity play.

The Sussex Academy varsity golf team won a sixth victory for the season April 11 against Polytech, 175-243, on the Seahawks home course at Bear Trap Dunes. Hannah Lydic won medalist honors with her 35.

Eighty-three women braved the cold and wind April 11 to play the annual Camp Rehoboth Women’s Fest golf tournament at Rookery South. The scramble/shotgun tournament is the kick-off event for the weekend festivities.

Tournament organizer Barb Thompson highlighted the support of the DuPree-Keating Group for Morgan Stanley, as well as Lana Warfield of Berkshire Hathaway/Gallo.

Demo Day at Rookery South May 4

Tony Gizzi is the owner of the Shrewsbury String Quartet. He told me recently that for many May 4 weddings the bride and groom ask the Quartet to play the Star Wars theme.

The Rookery also went Star Wars for this year’s Demo Day, with a May the 4th Be With You event set to run from 10:00 a.m. to 2 p.m. at the South Course’s driving range.

Club reps from Titleist, TaylorMade, Callaway, Ping, Mizuno, and Cobra are expected to be there with a wide range of new offerings. 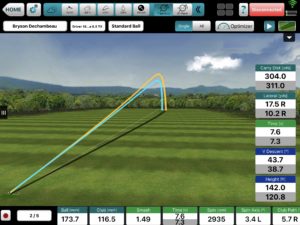 I stopped by the Flight Scope booth at the 2019 PGA Merchandise Show and reconnected with senior sales manager Alex Trujillo.

This year we talked about a significant add-on for the Flight Scope X-3, the company’s top of the line product.

In previous iterations, the X-3 monitor assumed a static condition in evaluating shot data and providing feedback. The new Environmental Optimizer elements take into account additional data, including elevation above sea level, the relative landing height where the ball returns to earth, wind speed and direction, and humidity.

Every one of these environmental conditions can affect the ball’s performance. Just ask anyone who’s played golf in Colorado or the Cape Region.

Golfers don’t really need a meteorologist degree. However, players intuitively understand more than they may initially appreciate how the playing environment affects their tactics and strategy.

For club pros and coaches who already have an X-3, the Environmental Optimizer can be added on through the App Store. Once loaded, the elements can be set as desired, for example when planning to play at high elevation while practicing at sea level.

Initial reaction is highly favorable, according to Trujillo: “They’re loving it.”