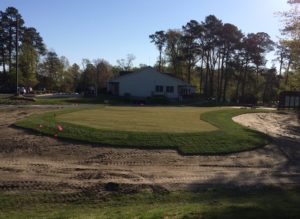 April 1 was opening day for posting golf scores for handicapping, shortly after the coronavirus pandemic restrictions altered how golf courses operated for their patrons, members, and staff.

The natural effect of placing limitations on outdoor recreation opportunities is to reduce participation. To some extent this was the intended result.

During that same period in 2019, 12,232 rounds were reported to the DSGA. Because of a switch in reporting systems, Heien said she could not determine how many golfers posted that five-figure total in 2019. She also said, “Honestly, 60% of last year’s numbers is higher than I would have guessed.”

The DSGA members who post their scores by no means reflect the total number of golfers who use the over thirty golf courses open for play in the state. However, the DSGA set is a handy proxy to understand the general trend.

Heien also noted, “Obviously there’s some significant revenue loss associated with that drop – but given that many states … have a 0 in the rounds posted column right now, it’s comforting to remember that ‘some is better than none.’ Hopefully we’re trending in the right direction on all fronts heading into May and beyond.”

The DSGA Scholarship Fund announced an extension of the original application deadline for college-bound students from May 1 to June 15. Fund Board member Ron Barrows said the extension was intended to address the disruption caused by the pandemic.

For more information, go to DSGA.org.

A watch tribute to Dewey Beach and The Starboard 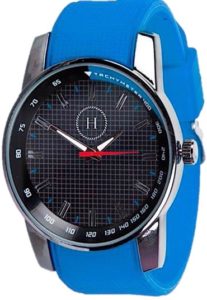 Jay Carpenter is from Richmond, VA and a self-described huge fan of the Delaware beaches. He is also the co-founder of Handley Watches, a line of sports watches aimed at “active professionals.”

One of Handley’s newest models, The Starboard, is a tribute to the famous Dewey restaurant and one of Carpenter’s favorite haunts when he visits the Cape Region. The quartz movement timekeeper’s black face is 44mm wide, with a “Starboard blue silicone” wristband. The $195 watch became available for shipment April 15.

Carpenter sent me one of their Nester models a few weeks ago to test. The silicone band fits snugly. It doesn’t move during my golf swings, which I can’t say about other watches I own. The 44mm watch face is also a nice size – easy to read the time, but not overwhelming on the wrist.

For more information, go to handleywatches.com.

Last year I wrote about Sacks Parente putters and the unusual configuration of weight and materials that produced a pendulum feel I haven’t experienced with any others.

I met again with co-founder Steve Sachs at the 2020 PGA Show and checked out the company’s two new models. 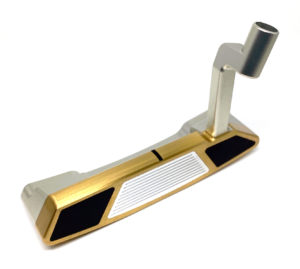 The Series 66 cavity back flange blade putter uses four different metals: brass in front, aluminum in back, a different aluminum alloy for the faceplate, and tungsten weights at the heel and toe. The company’s web site says about 80% of the total head weight surrounds the perimeter, toe, and heel. That extreme weight shift should reduce the negative impact of a mishit.

The Series 18 cavity sole flange blade putter also uses the light aluminum faceplate and tungsten toe and heel inserts, but the main body of the club is stainless steel. The back of the club is slightly rounded away from the center, in what looks to me like a mini-mallet design. According to the website, this design has a high MOI which helps the putter significantly resist twisting at impact.

Prior to the pandemic and its disruptions in the golf market place, these putters were sold for between $599.95 and $1,199.95, depending on shaft choices.

On April 20, however, Sacks Parente announced a major price break for all of their models for the remainder of 2020.

“Due to the unprecedented nature of the COVID-19 crisis, we have made the decision to discount the prices of all our putting instruments immediately,” said Tim Triplett, the Sacks CEO. “As we navigate these challenging times, we look forward to beating this virus and playing our favorite game with our favorite putter again soon.”

Even with the price cuts those are admittedly some hefty price tags. On the other hand, golfers typically use their putters for about 40% of all strokes during a round.

So the folks at Sacks Parente have that going for them – which is nice.