Steve Sacks and Richard Parente have enjoyed long and distinguished careers in the golf equipment industry.

Sacks worked in golf for over 40 years, with stints at Carbite Golf, Goldwin Golf, Bridgestone Golf, Rife Putters, and Yamaha Golf, among others.

Parente created or worked for several companies, with over 40 patents either granted or pending, and was the first president of Callaway Golf.

The two men recently founded Sacks Parente Golf Company, and came to the 2019 PGA Merchandise Show last January with a patented new putter design in both blade and mallet forms.

Sacks said, “All our professional lives we’ve tried to make the best possible clubs we can.”

The new putters incorporate a fundamental change in how the clubs are balanced from grip end to sole. The Sacks Parente Ultra-Low Balance Point is not more than 5 inches from the sole. By comparison, my Ping putter (with a heavy grip) has its balance point almost 11 inches from the sole.

Sacks said they discovered that with the balance point closer to the sole, the putter clubface naturally squares up and releases at impact. It is as close to a perfect pendulum as I have seen any putter perform.

The putter heads are fairly standard weights, around 350-360 grams in total. All of the models use heavy tungsten inserts for some serious head/toe weighting. 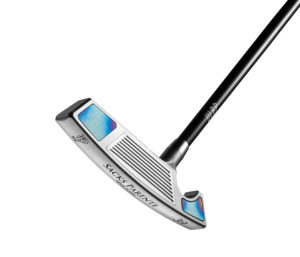 For example, the Series 39 blade putter features the tungsten weights and also an extremely light alloy insert in the middle. According to Sacks, the weight distribution significantly reduces twisting at impact.

The primary innovation was to use a lightweight composite material putter shaft that is half the weight of the standard steel types. In addition, they developed putter grips that weigh only 30 grams on average, less than half the weight of stock designs.

The massive reduction in grip and shaft weight means that the putter head becomes the only thing golfers feel when lining up to putt. The difference between the new putters and my own was frankly amazing.

I used the blade model for a series of putts from 3 to 9 feet or so on one of their demonstration carpets. Sinking putts became a matter of matching the backswing length with the forward swing, varying the length for the required distance. It wasn’t stupid easy, but it wasn’t hard, either.

The two mallet putters offer different alignment aids. The Striped Crown is made by “milling and filling” the flat sloping top, which is highest at the face and lowest at the rear. The multiple stripes help players follow the ramp up to the front toward the target.

The Vernier Acuity mallet is also sloped and shaped the same way, but features only three stripes on top. The two on the outside are one color and the one in the middle is both a little thicker and in a contrasting stripe.

Sacks said the Vernier system helps golfers focus on the center stripe. It’s a little weird at first, but he was right.

All of their putters also have an extremely forward center of gravity. Sacks said this “eliminates any gear effect,” an issue for some of the popular brands now on the market.

None of these putters are inexpensive. The lowest price models retail for $600 and the higher end models go for $1,200. For golfers seeking a significant increase in their putting fortunes, however, these models may be worth it.

Last spring I met Sacks Parente club rep Dick Caverly at the practice putting green at the ShopRite LPGA Classic, as he rep waited to show his clubs to the players. He told me that Louise Ridderstrom had just agreed to use one, and suggested I talk to her directly. 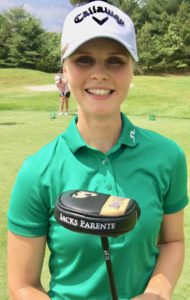 The LPGA Tour rookie and former UCLA college golfer cooperated by just happening to be on the practice range when I walked over there.

Ridderstrom was happy to talk about the newest addition to her bag, a Series 54 L mallet featuring a center shaft.

“My coach gave me a tip to try them. I call it my Zebra because of the stripes on top. The tungsten weights on the toe and heel seem to make the sweet spot bigger,” Ridderstrom said. “I have struggled with hitting out toward the toe, but this putter gives me a consistent rollout. I could tell after only a few putts that I would really like it. Even if I’m nervous and have a five-footer to make, the speed control is impressive,” she said.

The Kings Creek CC Ladies 18-Hole group played their Beat the Pro team scramble Sept. 5, with each team trying to also beat the pro at one of the par 3 holes to earn credit toward a lesson.