The 55th Delaware Open at The Peninsula Golf & Country Club in Millsboro took place July 27-28 in sweltering conditions. Over 136 professionals and low-handicap amateurs played the first round, with the cut for the 36-hole final the next day eventually reaching 3 over par.

Be careful out there 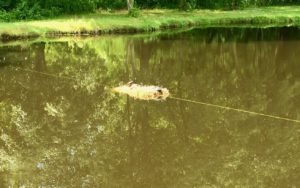 Turtles sunning themselves at the pond near the 13th hole, Rookery North. When it’s really hot, humans should not imitate reptiles.

We are in the middle of the dog days of summer, so it’s time for a reminder about the risks of heat related problems for golfers.

Heat cramps usually appear in the abdominal muscles or the legs during extreme heat. Heat syncope, on the other hand, is a sudden loss of consciousness or strength because it’s so hot. Fainting is often the first sign.

Golfers suffering from heat exhaustion can have clammy skin that is cold to the touch, accompanied by weakness, vomiting, heavy sweating, and sometimes fainting. When hot humid weather prevents sweat from evaporating, the body’s cooling system is essentially stymied.

The worst stage of heat exhaustion is a heat stroke. The golfer’s skin is dry and hot. These signs can be accompanied by confusion, loss of consciousness, a rapid heartbeat, and a high fever.

For heat cramps, if the golfer is alert, have her drink Gatorade or a similar electrolyte replacement, or some lightly salted water, or just cool water, and massage the cramps until the muscles relax.

For the early stages of heat exhaustion, convince the golfer to lie down in a cool place. Place cool wet cloth or cool water on the skin to help bring down the temperature. Cold compresses on the neck, groin, and armpits may help.

If the golfer faints, or is deeply confused or disoriented, or seems to have a high fever, don’t waste time. Call 911 for immediate medical attention and also let the golf pro know about the problem.

To reduce the chance of heat-related illness, use a golf cart and pick another day to walk. Keep drinking non-alcoholic liquids during the round. If there’s a bench at the tee boxes, sit until it’s your turn. Stay in the shade and rest whenever possible. Wear lightweight, loose-fitting clothes to help keep the skin from overheating.

The Kings Creek CC Ladies 18-Hole group played a T and F game July 23, in which only the holes that start with T or F are used for scoring.