Congratulations to Dawson Anders for his playoff win in the 2020 Delaware Amateur, held June 22-24 at Heritage Shores in Bridgeville.

The 21-year-old from Telford, PA outdueled Austin Barbin of Chesapeake Bay Golf Club and Evan Brown of DuPont CC in three holes after four rounds of regulation play. The three men distanced themselves from the field with their 14-under par finish, six strokes ahead of fourth place Brandon Berry.

Cape Region golfers were well represented in the large field, with Jay Whitby of Rehoboth Beach CC best among the locals at T-15. Tanner Leonard of Bear Trap Dunes tied for 21st, with Andrew Hewitt of Cripple Creek CC tying for 26th and Josh Covey of Heritage Shores finishing 39th.

Déjà vu all over again for Ping? 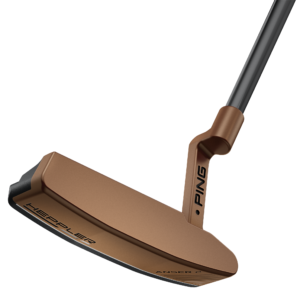 At the 2020 PGA Merchandise Show last January I met again with Erik Henrikson, Ping’s Director of Innovation and Testing. The pleasant Ph.D. walked me over to the booth area highlighting the company’s new Heppler line of putters.

Henrikson said the distinctively colored matte-finished black and copper clubs are being offered in 8 different models, as well as an armlock version. “We’re complimenting last year’s Sigma 2 line,” Henrikson said. “Those were made to be soft and quiet. The Hepplers are made to be more firm and responsive.”

Unlike the Sigma 2 putters and many other putters sold in recent years, the Heppler putter face is solid and flat with no grooves or insert textures, which Henrikson said “add softness and speed changes.” He said the Hepplers create a “firm sound, definitely metallic.”

His description made me think of my trusty Ping B60 putter, a flat face design from about 20 years ago. There are no inserts, no milled grooves, and a definitely firm sound at impact.

It would be like déjà vu all over again, but unfortunately there’s no Heppler B60. Henrikson said the Heppler Anser 2 is its closest cousin, in part because both are suited for putting strokes made with “a slight arc.”

The Hepplers are available with Ping’s adjustable length shaft. Henrikson said the reaction to these shafts has been “really positive.”

The putters are multi-material designs, with high pressure cast aluminum for the lighter parts and steel for the heavier segments. “They have double the MOI [moment of inertia] of prior designs,” Henrikson said. 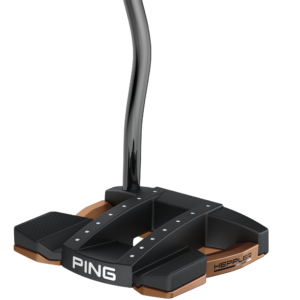 I am not a fan of exotic putter shapes, but I liked the two-track alignment dots on the Heppler Tomcat 14 putter. Henrikson said the sight of runway lights on approach inspired the club designer.

The dots are placed closer to each other as they recede from the putter face. During the putting motion they should give an illusion of two straight lines. That element of the design should be helpful.

We finished our visit with a look at Ping’s new G700 irons, which come in a beautifully muted black finish. Henrikson said the treatment is called Hydropel Stealth, and it carries forward last year’s water-shedding element that first appeared on Ping’s wedges.

Henrikson said they like the “slimming aesthetic” of the dark color and said they also “took a hard look at the sound and feel” of the new clubs. The game improvement design has a bit less offset appearance, but the maraging steel face should combine with other elements to produce the typically helpful Ping deliveries.

The clubs also come with the Arccos Caddie Smart Grips and a 90-day free trial of the stroke analysis app. A $99.99 annual subscription fee will keep the service going.

Sue Ahern won closest to the pin on the third hole.