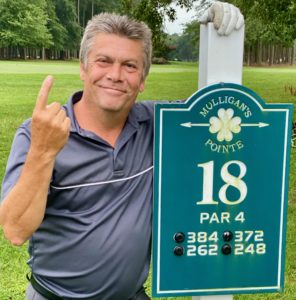 Juergen Trager played a round at Mulligan’s Pointe on Sept. 7 with his son, Eric Rodriguez. Using the forward tees at 262 yards, Trager’s drive ran into the hole for a rare hole in one on a par 4. That is called an albatross by some and a double eagle by others, but it goes on the scorecard as a 1 in any event.

Right after the shot went in, his son chose the occasion to tell Trager he is also going to be a grandfather.

Good timing all around.

John “Jack” Desmond passed away recently, and Butch Holtzclaw asked for a little help in honoring one of the South Carolina resident’s last wishes.

Desmond grew up in New York, served honorably in the U.S. Army, and had a long career in the poultry industry. For several of those years Desmond and his family lived in Delaware, where he and his son John played golf at Shawnee Country Club.

The younger John became good friends with Holtzclaw in the early 1980s. They played together on the Cape Henlopen High golf team and on many other rounds.

In 1987 young John applied for a scholarship from the Delaware State Golf Association Scholarship Fund. Young John received a stipend and attended UNC Greensboro, where he played on its golf team.

According to Holtzclaw, the family always appreciated the support from the DSGA – so much so that Jack’s obituary specifically asked for donations to the Fund in lieu of flowers.

Holtzclaw let me know about the situation, and I am happy to pass along the request.

If you would care to join in, please send your donations to the DSGA Scholarship Fund, 20 West Buckingham Drive, Rehoboth Beach, DE, 19971.

It is a nice way of returning the favor. 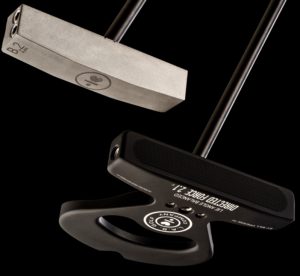 The funniest promotional sign I saw at the 2020 PGA Merchandise Show in Orlando, FL last January was on the outside wall of the booth for L.A.B. Golf of Reno, NV.

Its message was simple but effective: “Putting doesn’t have to suck.”

Naturally, you wouldn’t see that sign unless the folks at L.A.B. also had a proposed solution for you.

The putters seek to help golfers keep the putter face perpendicular to the intended line at impact. The initials “L.A.B.” mean Lie Angle Balance and refer to the way the head design maintains that aim throughout the stroke.

To make it work for you, a required fitting will match your tendencies and preferences to the putter, which is then custom-built. This can be done either by an in-person process or online at the L.A.B. website. There are several customization options for color, grip, and shaft.

The D.F. 2.1 putter is an unusual and large shape, made from high-grade aluminum and CNC milled to its final shape. I was surprised how big it was compared to my Ping B60. It retails for $450.

The B.2 putter is much closer to a traditional blade putter shape and size. It uses the same center shaft design and sells for $399.

The company’s sense of humor also extends to its website. According to L.A.B., the B.2 putter “feels like surfing on rainbows and frolicking with puppies in a golden meadow.”

These putters may take some time to adjust to the design. If they perform as promised, however, misgivings about appearances should diminish if not disappear completely. 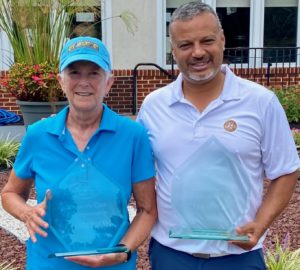 Juan Johnson won the men’s division, with Will Millikin as the runner-up. Wes Townsend was the low net winner.

Gene Bleile writes a fun column about golf stuff in The Beach Paper, the Cape Gazette’s seasonal companion on the newsstands. He is also active with the Seaford Swimming Association.

The SSA is holding its second annual golf tournament Oct. 10 at Hoopers Landing Golf Course, part of a fundraiser to address some upgrades. The Association’s 64-year-old pool is now an historic landmark as well as a valued community recreation resource.

The $85 player fee covers the golf, mulligans, a lunch card honored at a Seaford restaurant, and prizes. Sponsorship opportunities include tee signs and foursome packages.

The Mulligan’s Pointe Ladies golf gang played a Criers’ Tournament Sept. 15, in which the worst scores on three holes are eliminated.