A few more holes to go

The DSGA is close to meeting its $10,000 goal, and Jeff Baxter of Cripple Creek Country Club is stepping up to the challenge – excuse the pun.

He will play with DSGA Executive Director Laura Heien at Cripple Creek on Oct. 26 in an attempt to meet and then exceed that goal. For more information, or to donate to this effort, go to DSGA.org and follow the link. 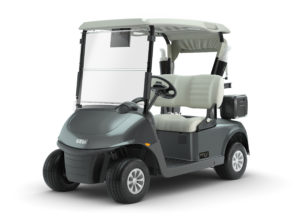 In my next talk with Haddock at the 2020 PGA Merchandise Show, he showed off EZ-GO’s innovations on the gas-powered side. The company’s new RXV model features a new engine specifically designed for golf carts. In years past the cart gas engines were adaptations from other small-powered vehicles.

We also discussed the considerations golf clubs make when deciding whether to go with gas or electric carts. Haddock said gas-powered models most often appeal to clubs that have significant elevation changes on their course. Prior electric cart models often struggled with the added power demands of steep inclines. They also had difficulties in colder climates, giving gas-powered carts an advantage at those locations without regard to elevations.

He said lithium battery powered motors and AC drivetrains have closed that gap, but not completely.

I have also heard folks complain about exhaust and noise from gas carts. EZ-GO’s new gas engines may help reduce or eliminate those concerns.

At the 2020 PGA Merchandise Show I had a fun conversation with Chris MacNeill, a senior product line manager in Puma’s golf apparel group.

He first showed me their newest collection, the Cloudspin Champions Golf polos, which retail for $70. MacNeill suggested the poly-spandex combination provided the comfort of cotton with the moisture wicking qualities of the technical fabrics.

I didn’t work up a sweat to test it, but the fabric felt very soft to the touch.

As for fabric designs, MacNeill laughed when I asked him if heather is still a thing in golf fashion. “Heather is a solid at this point,” he said. “The fact is that it looks more elevated than a straight solid polo.”

He then showed me some of Puma’s outwear line, starting with the Sherpa and on to their wind block front pullover. Made with all performance fabrics, some of these pieces are made without pockets.

MacNeill explained that the pieces intended for golf-only use tend to avoid pockets so as to inhibit bunching or twisting issues during the swing. Customers prefer the pocketed options for the other pieces aimed at the urban sportswear look for off the course.

MacNeill also drew my attention to the Stealth ¼ Zip pullover, inspired by Puma spokesperson and PGA Tour star Rickie Fowler. Apparently, Fowler folded in the front wings of his pullover during a tournament to keep from being distracted by movement while playing. He discussed it with Puma, and they figured out a way to redo the collar and eliminate the need to fold any fabric out of the way.

It looks very nice, actually, and is available in five colors for $75 – with no pockets. 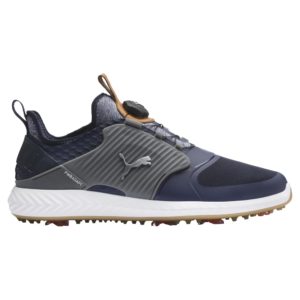 I also met Andrew Lawson, a Puma product line manager in the footwear and accessories division.

He first showed me their upgraded Ignite PWR Adapt shoe. “The big update is in the upper,” he said. “There’s now a strap running around the back of the heel for added stability. We’re also proud of the new disc system alternative to lacing,” with the turning knob set at the top of the shoe where the knots would otherwise be.

I much prefer this location to the knob shoe tighteners on other models that are located on the back of the heel. Lawson said this design change is currently “proprietary to Puma.”

He also said more Puma golf shoes are sold spikeless than spiked. Lawson suggested golfers are more and more comfortable with wearing the designs off the course, which makes buying the spikeless version completely understandable.

The spiked versions continue to dominate on the pro tours, Lawson said. As he suggested, when a win or many thousands of dollars are at stake, avoiding even the slight risk of a slip during a swing makes that decision easy for Tour players. For someone like Fowler, for example, “He doesn’t want to think about it,” Lawson said.

And he doesn’t have to.