Giving thanks for charity through golf

The Cape Region community should be proud of its efforts to help those who need it.

In a normal year, there are scores of events and activities that convince people to open up their wallets for good causes.

In a normal year I publicize about two dozen golf fundraiser tournaments held throughout the area – and those are just the events that made it into this column. 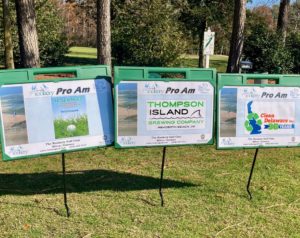 This was not a normal year.

Most charity golf fundraisers in the Cape Region were cancelled, postponed, or downsized, because the logistical, organizational, and safety restrictions related to the pandemic response made it so difficult.

For example, a local volunteer fire company/auxiliary normally holds a fall fundraiser event at a Cape Region public course, raising between $7,000 to $8,000. The volunteer in charge of running the tournament cancelled it. He couldn’t bring himself to ask struggling restaurants and other Cape Region businesses to donate items or sponsor the event, when they were already under tremendous money-draining circumstances. Furthermore, the limitations on after-round gatherings for a meal and an auction just didn’t work from his perspective.

It was not all doom and gloom, however. Several events succeeded in raising needed funds despite COVID-19. Here are some examples.

LHS Development Director Michael Whitehouse told me the event raised $25,000. The event’s success generated enough buzz to go ahead and schedule the next tournament for Oct. 7, 2021.

The Delaware State Golf Association announced earlier this year an agreement with Youth on Course to support subsidized golf opportunities for junior golfers. The YOC has similar agreements with most of the country’s golf associations, helping thousands of youngsters play the game.

To raise money for the subsidy cost, the DSGA held a 100 Hole Hike. DSGA staffers and others played a lot of golf on a single day, with donations coming either in a set amount or an amount per hole. The first such event took place at Bear Trap Dunes Sept. 28, with a second round held Oct. 26 at Cripple Creek Country Club with Heien and volunteer Jeff Baxter.

Clothing Our Kids is one of most successful grass-roots charities to be created in the Cape Region. The organization provides clothing and footwear to needy elementary-age children throughout Sussex County. The primary source of funds has been a fall golf tournament at Peninsula G&CC, where many of the charity’s supporters live. The tournaments’ successes inspired a second fundraiser in the spring, an auction party.

The pandemic response forced the postponement of both the golf tournament and the spring auction in 2020, along with a significant cut-back in the charity’s day-to-day operations.

Undaunted, COK chose a new option to deal with the situation. On Sept. 27 the Kruisin’ For Kids parade of highly decorated cars, often convertibles, rode through the Peninsula’s neighborhoods. Butterfly nets hanging from the cars collected donations from the residents, and a safely spaced Tailgate party to judge the car entries finished the day. It raised $8,000 – not a huge amount compared to the five-figure sums raised normally, but it will spend, and the county’s needy children will benefit.

Since 1986 the Delaware State Golf Association Scholarship Fund has raised over $1.3 million dollars to award college scholarship stipends to high school seniors demonstrating academic achievement, community service, and a love for golf. Many of the recipients graduated from Cape Henlopen High School and other Sussex County schools.

A fall tournament held at Rehoboth Beach Country Club is the primary money-raising vehicle. Despite pandemic restrictions, this year’s event in mid-September brought in $44,283.

The First Tee of Delaware is part of a national organization supporting junior golf. The First Tee’s programs use golf to develop character and personal growth, without losing sight of the fact that this is a fun game to learn and play.

The Rookery’s long-running annual Pro-Am to support The First Tee of Delaware wasn’t too affected by the pandemic, in part because it’s on a small scale. This year’s tournament took place Nov. 4 and raised over $4,500.

Thus far the Marathon raised over $20,000, which will stay in the region and help local juniors.

If you have the time and the dime, please consider participating in these and other charity golf events as part of meeting your own charitable goals in 2021.