The National Golf Foundation noted recently that most segments of the golf industry have done very well in the latter half of 2020, despite the predicted impact of the pandemic. Those include training aids and golf apparel.

Martin Chuck is a familiar name for avid viewers of The Golf Channel. The longtime golf professional and teacher runs a golf academy in Arizona and has invented or promoted several popular training products.

For all those prior successes, however, nothing has come close to his latest invention, the Tour Striker PlaneMate.

Co-invented with his friend and PGA golf pro David Woods, the PlaneMates appear to sell as fast as they can be made.

At the Tour Striker booth at the 2020 PGA Merchandise Show last January, I saw a large stack of empty PlaneMate boxes. Alanna Massey, the company’s PR specialist, said that as a courtesy they took the items out of the large box as they were sold to make it easier for the buyers to go see other stuff at the Show. The stack of empties was already impressive just after noon that first day, especially when you consider that the devices sell for $162.99 each.

At his booth, Chuck oversaw personal demonstrations of the PlaneMate, interspersed with selfies with smiling club pros. After putting a special belt on the pro, Chuck attached a short length of stretchable cord to the belt and to a golf club. He moved the players through the desired swing sequence as he explained how the device promotes a proper takeaway and rotation for an improved inside-out strike.

Most golfers seemed to get the hang of it in a few minutes. For some it was obviously a very different approach to the golf swing than they had been using.

Chuck kept up a steady stream of conversation, with phrases such as “lead heel trail toe,” “free up the pelvis for the turn,” and especially “the band tension must be kept, flaccid doesn’t work.”

Several demonstrators said that after a few swings it felt like the tension was there even without the band.

Chuck and I talked briefly. He said golfers need more awareness of where the club is during the swing. The bands help create these sensations for self-analysis, in combination with the video lessons.

The system comes with a series of videos outlining a seven-day protocol for learning how to swing better – one for each day. Three different bands are included: a short one for partial swings, a longer green band for the regular full swing, and a red band for increased resistance.

Massey said the product really took off when multi-major winner Rory McIlroy posted selfie videos using the PlaneMate. That kind of unpaid endorsement is hugely valuable. It has certainly paid off well for Chuck and his group.

The fact that the Planemate works for a variety of golfers and not just touring pros is an even bigger endorsement.

I enjoy learning how well a golf company understands their customer base.

That is one reason for my amiable conversation with Callaway Apparel sales rep Alan Alison of Strawn, TX, during the 2020 PGA Merchandise Show. Alison has worked with the company for several years. He was pleasant and forthcoming as he showed samples of Callaway’s polos, pullovers, and golf pants.

“I think our lane is predominantly the guy who’s 45-75. Most of our shirts sell for $55 to $75, and he’s fine with that. There might be one Peter Millar polo in his closet, but that’s about it,” Alison said. “Our polos have a traditional cut and drape.”

Knowing your customers’ style and price preferences is key to long-term success. Callaway Apparel is among the leading golf clothing retailers for that reason among others.

We looked at the Swing Tech™ Gingham Polo, which retails for $65. Swing Tech refers to better freedom of movement during the swing. Alison said this 92% poly/8% spandex model had its “best-ever” year in 2019. Made with the now-typical moisture-wicking fabric, it also provides UV protection. 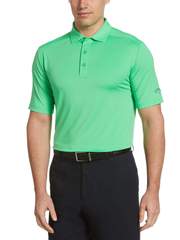 The 3-Color Yarn-Died Polo was the third-best selling model last year, according to Alison. It boasts UPF 40 sun protection, with Opti-Dri moisture management, in a 95% poly/5% spandex stretchy fabric. It sells for $65. Alison pointed to the small Callaway logo embroidered on the left sleeve.

When I said other golf apparel companies seemed to be avoiding solid colors, Alison said Callaway embraced that design. He said the solids are consistently among their best-selling items, referring again to the core demographic target they serve. He referred specifically to the Micro-Hex Solid Polos, another technical fabric design that sells for $55.

There is still a place for shirts that are not solids, however. I was impressed by the Swing Tech Landscape Block Polos, which sell for $75. The 86% poly/14% spandex design is light and stretchy, and the golf-themed graphic on the chest looks particularly good in the white background version.