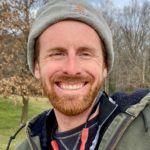 Mike Pyne, superintendent at The Rookery

Michael Pyne, the new golf course superintendent at The Rookery near Milton, has jumped right in with a major bunker renovation project since he switched jobs with Greg Thomas at the start of the new year. Thomas assumed Pyne’s former position at Hooper’s Landing, where he also worked before coming to The Rookery in 2016.

Pyne is a Milford native, graduating from Milford High in 2011 and earning an Ag degree in Natural Resources, Landscape Design, and Horticulture from the University of Delaware in 2015. Pyne played golf for the Milford Buccaneers and was the president of the UD men’s club golf team. He admits to a 5.4 handicap but claims he can’t play to it at the moment.

“Chris Adkins hired me right out of college to be an assistant to him and Mark Naumann [at Rookery North],” Pyne said in recently. “In October 2016 I went to Hooper’s Landing and became its course superintendent at age 24,” he said.

Pyne credited Thomas for his work at the Seaford course. “I tried to build on what Greg had established while he was there. There was root pruning and tree work, and I continued to establish turf where it was needed. We were able to get the greens up to a firm and fair pace, and it was nice to see the rounds increase while I was there. People liked what they were seeing,” he said.

Since January 1, Pyne and his staff have been busy with The Rookery’s bunkers. “We’re doing a complete in-home bunker restoration throughout the course,” he said. “We’re starting with all of the greenside bunkers. If we have the time after those are done, we will take it from there and do the fairway bunkers.” 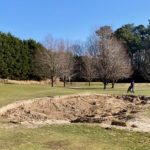 Renovating a bunker often includes new edging that expands it.

The first step is to locate and dig out the existing drainage pipes within each bunker. “Once we open them up, we can see what needs to be addressed,” Pyne said. “We also check the cleanouts [for the pipes taking water from the bunker] for each of them. After we remove the old stuff, we put in pea gravel under and over the new drainage pipes.”

Once the pipe systems are restored, new sand is brought in, in this case from Disney Sand in Hebron, MD. Pyne said the new sand meets United States Golf Association specifications.

The new sand is currently very fluffy. I landed in a restored bunker during a recent round and it felt like walking on the beach. “The sand will compact. We need that first rain for that,” Pyne said.

“This project should take all winter,” he said. “If we can, we will also work on some irrigation and signs. We also have to remove some of the fence [for the upcoming Route 1/16 interchange project].” 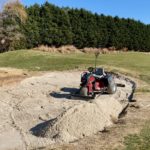 Fresh sand is the last step for a bunker re-do.

In addition, his staff is placing stone dust in some of the rutted areas of the cart paths. This material stays in place and should be familiar to those hiking or biking the Junction & Breakwater trail. “We know there’s a lot of cart use, so we have to keep those areas in good shape,” he said.

As for other potential maintenance, Pyne said he would like to complete some pond clean-up at the edges, especially where trees have appeared during the course’s first 20 years. Those trees were not part of the original design, but birds have a way of spreading seeds into unwanted places.

“This is definitely a fun course,” Pyne said. “My goal is to keep it fun and refreshing. I would really like to see if I can increase the green speeds.”

Baywood Greens is using temporary greens on the 5th and 17th holes while its staff installs drainage improvements on those fairways.

As course superintendent Jamie Palokas explained, “The last few summers presented us with heavy afternoon thunderstorms on days when temperatures were well into the 90s.  This combination can be extremely detrimental to turf health during July and August when soil temps are already elevated.”

“We are hoping the installed drainage will help alleviate the environmental stresses caused by these conditions and provide optimal playing conditions throughout the summer months,” he said.

Prepping for the new season

Here are three suggestions to upgrade your golf equipment.

The 2021 PGA Merchandise Show begins next week, where most major club and ball makers will show off their new lines to a vast, now virtual audience. I will “attend” by staring at my iMac for several hours, and let you know all about it in upcoming columns.

The new stuff means that last year’s models are being sold at tempting discounts at local pro shops as well as places such as Second Swing, Dick’s Sporting Goods, or Golf Galaxy.

You can also arrange with local pro shops for a re-gripping of your existing equipment. It is inexpensive and will keep your golfing spirits up as we wait for warmer weather.