Youth movement on display on LPGA 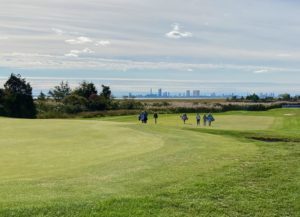 The Ladies Professional Golf Association continues to benefit from the elite collegiate programs.

Maguire ranked as the world’s best amateur golfer for nearly three years. The All-American at Duke University tied for 21st in the 2016 Rio Olympics for Ireland. She played the Symetra Tour in 2019 and earned her LPGA Tour membership for 2020.

Fassi won the 2019 NCAA Women’s Division I title while playing for the University of Arkansas. The Mexican gained LPGA Tour status through the LPGA Q-Series in 2018, turning pro in May 2019.

Fassi and Maguire paired with LPGA veteran Ayako Uehara for the final round at the ShopRite, all tied at a respectable 3-under par. The group began play on the tenth tee, with split tee times due to daylight limitations and TV coverage requirements.

Maguire immediately made the first birdie with an approach shot that landed past the hole and sucked back to 6 feet below it. She also birdied the 11th hole from 10 feet, while Fassi made her first bird from 12 feet.

Uehara used her driver on the 12th hole and made a nice birdie with an approach to 2 feet from 75 yards out. Maguire recovered from an errant approach shot, chipping to 2 feet and saving par.

Fassi’s drive on the 396-yard par 4 13th finished 115 yards from the center of the green. Her approach stopped 10 feet below the hole, and she made the one-putt. Fassi’s approach from 129 yards on the long par 4 14th hole landed even closer, to 5 feet for an easy birdie.

Maguire’s next birdie came on the par 5 18th. Her second shot finished about 40 feet from the hole. She chipped from there to 1 foot for her 4. Fassi blasted another long drive and used an iron from 198 yards out to finish 28 feet below the hole. Her putt fell in for her first eagle of the day.

When the group walked over to the first tee for their final nine holes their momentum came to a dead halt, caused by troubles on the tough par 4 second hole for several threesomes ahead of them.

The second hole also became Maguire’s first bogey. Her approach shot from the rough finished 15 yards short of the green, and her flop shot stopped 20 feet from the hole. Maguire two-putted from there.

The Irish golfer bounced right back on the short par 5 3rd with a birdie putt from 2 feet below the hole. Fassi also two-putted for birdie, after placing her second shot 35 feet from the flagstick.

Fassi made her first bogey on the par 4 4th hole. Her drive landed in nasty rough and the marshals warned Fassi and her caddie that her ball was surrounded by poison ivy. That lead to a call for an LPGA official. Fassi learned that golfers cannot take relief in those circumstances other than by taking an unplayable lie with an extra stroke charged. Fassi wedged out and said, “Get the cortisone ready” and took her third shot from 65 yards. The recovery putt through 3 feet of fringe didn’t fall.

Fassi’s long drive on the sixth landed in the left rough. From there her second shot landed 20 feet above the hole, as she begged unsuccessfully for her ball to roll back. Her first putt came up short, the second one went long, and she was not pleased.

Meanwhile Maguire continued her steady play with a string of pars. On the short par 4 eighth hole, she made a great putt from 7 feet for another birdie. Uehara struggled throughout the round, with a few more bogeys than birdies.

Fassi made a good par on the 7th hole but was visibly unhappy when her birdie putt from 6 feet away rolled a foot past the hole on the 8th.

That may explain why Fassi took a healthy whack with her driver on the short par 5 ninth hole, the group’s last of the day. As it shot off toward the trees right of the fairway, she let out a short sharp phrase in Spanish that needed no translation. Fassi strode along the cart path while her caddie wisely walked down the center of the fairway.

She caught a break, however. Her tee shot finished in the cart path just left of the trees, about 220 yards out. Fassi’s iron shot made a loud thudding noise on impact. The ball finished in the rough about 25 feet short of the hole, and she chipped in for eagle.

Fassi and Maguire impressed in different ways. Maguire picked apart the course and took advantage of her birdie opportunities. Fassi is undeniably long off the tee, which forced her to drop back to a fairway wood or iron on several par 4s. Nonetheless, she played the par 5s just as you would hope for a long-hitter, making up in part for some of her less-skillful moments.

These two will be fun to watch.