Something seems to have clicked. 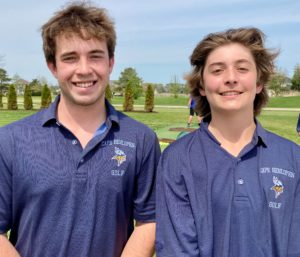 The Vikings’ total was 29 strokes lower than their previous best score in its opening match against Smyrna March 22, and a 34-stroke improvement over the team’s last performance in the April 1 tri-meet against Caesar Rodney and Polytech.

Ethan Mercer won medalist honors with his 5-over par 41 on Nutters’ front nine. “I had one double bogey, a triple bogey, and the rest were pars,” he said. “That triple came on a par 3.”

Senior Quinn McCullough finished with a 44, his lowest score ever for the Vikings. An early season illness and a nagging swing issue both seem to have disappeared for him.

Flynn Kalb posted his season-best 45 for third place among the Vikings. “It was fun. The course worked good for me. It wasn’t very intimidating, and I was chipping and putting well.”

Senior first year player Forest Dotterer completed the team scoring against Delmar with a 48, his best of the season.

The Vikings next played host to the Dover High Senators and Kyle Kerr, a ninth grader at Woodbridge High School, on the front nine at Rehoboth Beach Country Club April 28. The Cape players improved by three strokes from the Delmar match, winning 175-204 against the Dover squad and by forfeit against Woodbridge.

Junior Tom Burn was extremely pleased at his medalist honor-winning 40, four strokes over par. “That was the best game of golf I have ever played,” he grinned.

Burn’s highlights included a tap-in birdie on the par-4 second hole along with several pars. He said he was most proud of his “wet bogey” on the par-4 sixth. Burn’s drive drifted into the pond right of the fairway, leaving him with a 9-iron third shot from 110 yards after taking his penalty stroke. The approach landed on the green and he two-putted for his 5.

McCullough improved on his Delmar score by three strokes with his 41, which he said “felt amazing.” He birdied the sixth hole and also had a remarkable scramble on the par 4 8th hole. “My tee shot went just two feet. It was awful. Then I hit two iron shots to the front of the green and two-putted.”

Mercer shot a 47 and blamed a balky putter for most of his troubles. “I missed so many little putts,” he said. A recovery shot from a fairway bunker that he said “dribbled into the water” on the par-5 fourth hole led to his only triple bogey for the day.

Junior Seth Reynolds completed the team scoring with his 47, his lowest ever total for the Vikings. “I tried to play safe golf and didn’t use my driver or my three-wood.” Reynolds had a single triple bogey on the 8th and doubled the par-3 fifth, but also made 6 bogeys and a par.

Head coach Robert Harrod complimented his team for their performance as well as their attitude, sportsmanship, and team spirit. “You all are getting better with every match, and I’m very proud.”

Harrod also told the coaches, “It has to be something we’re doing in practice.”  He may have a point.

For the last few weeks, the golfers have been hitting approach shots from 100-125 yards out for three to five holes on almost every practice day, trying to use no more than four strokes to finish the holes. Most are noticeably improving their short-iron accuracy.

With only four match dates remaining, the Vikings’ lower scores are coming at a very good time.

This year’s Children’s Beach House (CBH) Annual Charity Golf Event will be held May 26 at The Peninsula near Millsboro. Event proceeds support CBH’s mission to help children with communicative disabilities succeed in life, and to help them reach their highest potential as functioning members of their families and communities.

The tournament begins at 11:30 a.m. The per player entry fee of $250 covers the range, a complimentary Bloody Mary Bar, gourmet boxed lunch, on course contests, prizes, and refreshments, along with a deluxe tote/cooler filled with fun snacks and treats-to-go.

The Rookery Women’s Match Team hosted a squad from Wild Quail Golf & Country Club April 27. The Rookery ladies won the gross competition 52-20 and the net category at 38.5-33.5 points. The winners next host a team from Maple Dale Country Club May 3.