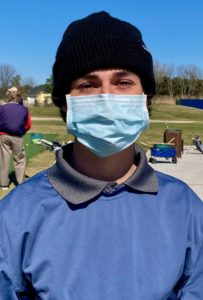 Junior Tom Burn won medalist honors with his 12-over par 48 on the front nine. It was his first experience playing Jonathan’s Landing. “I knew nothing about the course,” he said, “and I was surprised by a lot of it.” For example, he hit his second shot on the par 5 second hole and was stunned to see it almost go into the adjacent pond. “I didn’t see that water when I hit it,” he said. He bogeyed that hole, but a double bogey and triple bogey elsewhere didn’t help.

Junior Dylan Steinwedel had a successful first varsity start, finishing second best for Cape with his 53. “I was hitting my irons pretty well, and did some good putting,” he said. “I also hit some good chips.”

“Steinwedel kept his head in the game,” head coach Rob Harrod said. “He was impressive for his first start.”

Not knowing the course also wreaked havoc on sophomore Ethan Mercer’s round of 54. “It was windy. On one hole I hit a really good hybrid and didn’t know there was a pond there until I walked up to where I saw the ball go,” he said. “The greens were tricky, too, and fast.”

Junior Seth Reynolds completed the team scoring with his 56, while Flynn Kalb and Quinn McCullough tied with a pair of 58s. This was McCullough’s first varsity match for 2021, and he was pleased with his iron play.

The Vikings had another tri-meet set for April 1 at Wild Quail Golf & Country Club against Caesar Rodney and Polytech.

The pandemic eliminated 2020’s scholastic golf season in mid-March, including the state championship typically held the last week of May.

The Delaware State Golf Association assists the Delaware Interscholastic Athletic Association in running the event. DSGA Executive Director Laura Heien noted that the risk of COVID-19 and the severely limiting return-to-sports rules the pandemic caused the change in emphasis.

In prior years, the state tournament field included the four regular season conference champions, 6 additional at-large teams based on season records, and 36 high-performing individuals whose teams did not otherwise qualify. On occasion, enough individual players from a school and within that group of 36 could create an additional team for the states.

The old rules also required potential tournament golfers to play at least five matches for their team during the regular season.

The new arrangement selects the top 96 high school golfers based on their handicap indices as posted during the regular season. It is also possible, though unlikely, that a golfer who played only one match for his or her school will be able to compete.

The maximum number of players from any one school remains at six. However, team match records do not directly figure into the qualification scheme.

“After each match, the home team coach will enter the total scores for each player into the [DSGA handicap system], and the away coach can check them,” Heien said. “They’ll post them by player, gender, score, and which tee boxes were used.”

Once the system is fully up and running, which should be this week, each coach will be able to check the overall listings and see how his or her golfers compare to everyone else.

“We can’t rely on the conference tournaments to select the teams this year,” Heien said, referring to the risks of COVID-19 exposure. “There might not even be conferences.”

The state championship remains a two-day, 36-hole tournament. The cut after the first 18 holes will be the top 60 players and ties. A minimum of three team players must make the cut to compete for the team titles, as in past years.

The limit to 96 players takes into account daylight hours limitations and the needs of host courses. It is also similar to the total number of participants in past state championships.

“We appreciate the coaches’ cooperation in adapting to this change,” Heien said. “It should identify the best players.” 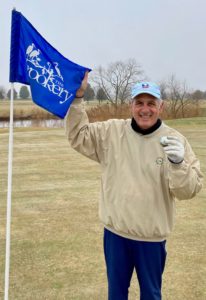 Yours truly with his second ace

My first hole in one happened 20 years ago in Myrtle Beach, SC while on a spring golf trip with Kevin Conlon, his brothers, and other friends.

My second one took place far closer to home but was also witnessed by two golf buddies – which made it equally enjoyable.

It happened March 17 on the par 3 second hole at The Rookery. I used a 5-iron for the 165-yard shot, observed by Mike Caballero and Mark Rath.