Wright book well worth the re-print 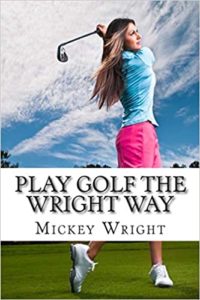 The Southern Californian enjoyed a successful amateur stint before going professional in 1954. She won multiple majors among her 82 victories on the LPGA tour.

Wright also contributed to golf literature with her book, “Play Golf the Wright Way.” A reprint edition came out a few months after her passing and is available in paperback ($14.95 SRP).

“Play the Wright Way” never enjoyed the commercial success of Ben Hogan’s equally slim volume, “Five Lessons.” Nonetheless, Wright’s thoughts on golf from several decades past hold up to current assessments about how to play the game.

Nearly half of the book’s 96 pages are photographs of Wright, mostly stop-action shots of her exquisite swing. That is a primary reason for the book’s ongoing appeal, because Wright’s reputation for how she swung a golf club continues to this day.

It also helps that Wright is plain-spoken. She gives clear explanations of not only what to do but also why. She had definitive ideas about the stance, the grip, the takeaway, and the follow through that her own experiences convinced her were the right things to do. Unlike the heavy hitters on the men’s tours, her swing data is also completely relatable to the amateur golfer.

Considering the equipment Wright used during her prime compared to what golfers use nowadays, we can better appreciate her comment in the book that she was one of the longer hitters in the LPGA when she averaged 225 yards. That length remains a worthy and not-yet-achieved goal for most golfers.

Whenever the subject of who to watch comes up among golfers I know or the readers of my column, I always suggest the benefits of watching the smooth, efficient swings of the members of the LPGA. This reprint proves that my advice would have been just as valuable 50 years ago as it is today.

Club champions crowned at The Rookery

Ken Monarque won the Men’s Net Flight, followed by Bill Turner in second and Bill Baydalla in third. Baydalla also aced the 9th hole in the second round.