Congratulations to the Delaware State University Lady Hornets golf team for their fine T-4 performance at the Navy Invitational, held Oct. 2-3 at the Naval Academy Golf Course in Annapolis, MD. 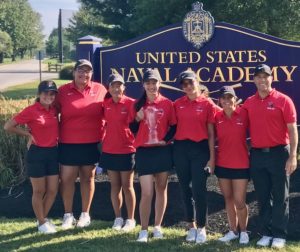 Nattavadee Khunsri won the individual title with her 6-under par performance, seven strokes ahead of second place finisher Lauren Jones of the University of Richmond. Khunsri’s first round 67 set a new course record for both non- and competitive rounds, according to head coach Rick McCall, Jr.

McCall was impressed with Khunsri’s demeanor. “It was flawless. She really stayed in the moment. On the second day she took a triple on an easy par 5, and you couldn’t tell. She does a really good job of controlling her emotions, which is hard in golf,” he said.

Amber Pennington was second-best for DSU with her T-15 finish. Estelle Verny tied for 36th and Taylor Simoneau completed the team scoring in 48th place among the 71 competitors.

The Hornets played without their No. 2 player, Ana Ferreyra Heit, due to Covid issues that blocked her participation for 14 days. The team adhered to DSU protocols as well as the Naval Academy tournament rules.

The Hornets’ next tournament is at Rehoboth Beach Country Club for the University of Delaware’s Lady Blue Hen Invitational Oct. 16-17. “There are 13 teams ahead of us [in the rankings] at Rehoboth, including UD, which has a great team. It’s a good opportunity for us to gain some confidence and maybe beat some of them.”

Be A Goldfish comes to the LPGA

The Emmy Award-winning comedy “Ted Lasso” takes place in an English professional football setting, but the coaching lessons it provides go well beyond that sport.

In a first season episode, a young player is upset after a mistake. Coach Lasso calls him to the side and asks him if he knew why goldfish are the happiest animals on earth. The player didn’t know, so Lasso explains that goldfish only have a ten-second memory. He then sends the player back onto the pitch.

During the second round of the 2021 ShopRite LPGA Classic presented by Acer, LPGA veteran Mo Martin thought she had a nice cushion for making the cut as she began play on the par-4 16th hole. At 3-under par at that point, all she needed to do was finish one-under for 36 holes.

It didn’t last. A rare drive into the rough helped produce a too-long approach to the green, bouncing beyond the green into nasty stuff near a fence. It didn’t help that the hole was only a few feet from the back edge, on a green that slopes down from back to front.

Martin told me later, “[The ball] was under a branch, and then [I got] it out and it landed literally on top of a branch. It was a really hard pin placement. Not exactly where you want to be in trouble.” The resulting triple bogey dropped her down to even par, possibly missing the cut by one.

That is when the goldfish made its appearance.

Moira Donley previously hosted and befriended Martin during past Symetra Tour events in Pennsylvania. At this year’s ShopRite she followed her favorite golfer out on the course and told me that some time ago she sent Martin a “Be a Goldfish” shirt. Donley also said that as Martin walked toward the 17th tee, she called out to the golfer to “Be a goldfish.”

Martin recovered her composure, made a nice birdie on that short par 3, parred the 18th, and made the cut on the number.

After the round, Martin told Donley she repeated the goldfish mantra several times just before her tee shot on seventeen.

Out on the golf course, bad things can happen to good golfers as well as the rest of us. Remembering to Be A Goldfish is a handy way to stop dwelling on the past and renew one’s focus on the next shot.

Still time for donations or sponsorships for Oct. 22 Elks fundraiser

All playing spots are filled for the Elks Golf Outing for Veterans on Oct. 22 at Mulligan’s Pointe near Georgetown.

However, hole sponsors or other donations will be cheerfully accepted. The $100 tee sign option includes free signage and within the players’ shag bags.

The Mulligan’s Pointe Ladies held their final event of the season Oct. 5, a Most Net Pars or Better game. Deb Malienski won first place, with Tammy Findlay in second and Chris Allison in third.