Local connections at the PGA Show

Wayne DeFrancesco is the new teaching pro at The Peninsula Golf & Country Club near Millsboro. He began working there last August and is preparing for the golf season at the club’s impressive practice range. 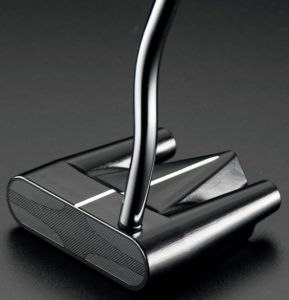 DeFrancesco is also a good buddy of Everett Farr, an engineer and avid golfer from Philadelphia. Farr and his partners came to Demo Day at this year’s PGA Show with a brand-new putter, the Makefield VS.

The weighted mallet-style aluminum club was an immediate hit with dozens of club pros and others. DeFrancesco said he was “there to help my friend,” and told me the reaction to the putter “has been almost 100 % positive. It’s got tons of technology in it.”

The putter’s main body is CNC-milled from a single block of aircraft quality aluminum and features three “fuselage” tubes leading away from a lightly gridded face. The X3 Weight System puts three sets of weight slugs inside each tube. The interchangeable slugs, made from aluminum, steel, or tungsten, permit the customization of the club’s performance characteristics.

The putter loft is set at 1.8 degrees. The two steel shaft options are a double bend type that enters the putter about a half-inch from the heel, and a center-shaft design. Add-ons from the base price of $399 include a full weight kit, as well as custom artwork or text options.

All putter components are made and assembled at the company’s factory in Bensalem, PA.

Mike Little, a past Philadelphia PGA Section player of the year, is also part of the company. Pointing to the weight options, he told me, “It’s the last putter you’ll ever need.”

I tested the putter on a fast green. The ball rolls quickly, with less skidding than others produce. It was not hard to adjust to how the putter performs.

The Makefield booth continued to draw a crowd of interested club pros during the rest of the week at the Orange County Convention Center. It appeared to me that the new venture was among those who benefited from the absence of the big club companies at this year’s Show.

Golf equipment companies rarely come up with a product line that is just right the first time. Tweaks and adjustments are inevitable as customer experience and other challenges force revisiting and revising.

Companies such as Bridgestone Golf make these revisions part of their continuing marketing efforts.

I met with Bridgestone’s Elliot Mellow at the PGA Show in 2020, when the rubber company announced its new Reactiv-covered golf balls. Chemical additives to the urethane created softer reactions at slow speeds, good for additional spin, and a stiffening reaction to fast impacts such as drives, reducing spin and lengthening ball flight. At that time, the chemical formula was kept the same for each ball in its Tour Ball lines.

Last year Bridgestone added a structural change to its e12 line. A raised center inside the dimples created more contact space for improved flight characteristics, according to Mellow.

This year’s Demo Day visit with Mellow at Bridgestone at Orange County National Golf Center focused on the third edition, called Reactiv IQ. Mellow said the company altered the chemical ratios of the elements added to the Tour Ball urethane covers to create “a better customization for each of the four types of golf balls. It was a change to fit the player profiles for each one.”

While gaining feedback from touring pros, Mellow said the company also “studied the amateurs” for their response to the golf balls. The Tour B X, Tour B XS, Tour B RX, and Tour B RXS now provide different degrees of spin and distance control, tailored in part based on driver club head speed averages as well as the balls’ interior design elements. 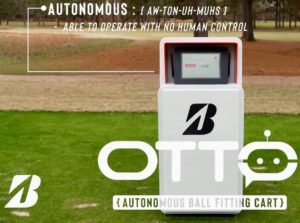 Bridgestone also remains committed to ball fitting, adding a new bit of technology to its ball-matching services for 2022. Mellow described the OTTO as the first “autonomous ball fitting machine” aimed at beginners and those who perhaps spent more time at Top Golf than on a golf course.

Mellow said OTTO is a “more accessible option. There’s no human pressure from the person standing there watching you swing.”

“It’s been in development for about three years,” he said. “There’s a crossover element from entertainment golf that we think will work.”

The machine stands a few feet from the player and records three drives with its on-board launch monitor. Using a database from Bridgestone’s past fittings, the system recommends which ball in the Bridgestone line-up is best suited for the player.

OTTO forwards the ball recommendation, including swing data and videos, to the user’s email account as part of the registration process. The device’s wheels permit easy movement on the range. Its battery system is easy to plug in for recharges.

For now, the machines are in use at a few locations. Bridgestone expects to expand OTTO’s presence incrementally during the coming year.