I began playing golf in 1984 at the Ed “Porky” Oliver golf course, near our row home in Wilmington, Delaware. The original site of Wilmington Country Club, the county government took ownership of the property and changed its name to Greenhill Golf Course.

In May 1983 the county council renamed the course to honor Oliver, one of Delaware’s best pro golfers and a former caddie there during its Wilmington CC days.

At the time I knew nothing about Oliver. I was a complete newbie to the sport. In the years since, I created HoleByHole. com, wrote about 200 golf book reviews, worked two stints as a club president, and am currently in my 24th year with this golf column. Along the way I picked up a few tidbits about Oliver and his status in Delaware and beyond, but not much.

John Riley’s new book, “How He Played the Game: Ed “Porky” Oliver and Golf’s Greatest Generation” filled in the large gaps in my knowledge about this influential player. Oliver played and beat legends such as Ben Hogan, Byron Nelson, and Sam Snead until he passed away prematurely from lung cancer in 1961.

Richly detailed and thoroughly researched, Riley’s book is a warm and appreciative biography. It is also a good history of the middle period of the PGA tour – after Walter Hagen and other notables of the 1920s and early 30s, and just before television expanded public interest (and money) in the sport. 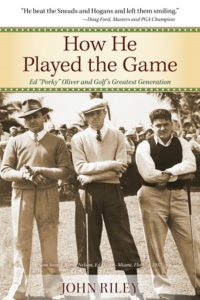 This book deserves a place on avid golfers’ bookshelves, next to Al Barkow’s “Golf’s Golden Grind” and “Gettin’ to the Dance Floor” and Curt Sampson’s “Hogan.”

In addition to Oliver, Riley presents character studies of what might be called the second rung of touring pros of that era. Hogan, Snead, and Nelson won a lot of tournaments, but Oliver and others also won their fair share, including in direct competition with their currently better-known peers.

Luckily for us, Oliver was perhaps the most colorful and accessible a golf pro as graced the tour at the time, with an interest in crowd-pleasing almost as keen as his interest in winning.

Riley provides example after example that Oliver understood and accepted the fact that professional golf is part of the entertainment business. Unlike his often more stoic competitors, throughout his career Oliver loved engaging with the crowd, who returned his affection manyfold. The sporting press also loved him right back, as a source of what’s called “good copy.”

During Oliver’s time in the sport, making a good living as a touring pro was a dicey proposition for most. Oliver’s struggles to play well enough to provide a middle-class lifestyle for his growing family are well documented. As Riley shows, if Oliver enjoyed a similar record in modern times, with eight Tour wins, 39 seconds and thirds, and dozens of top ten finishes, his earnings would have earned millions.

That wasn’t Oliver’s world, however. Instead, he hustled from tournament to tournament, club pro job to club pro job on both coasts and in between, using exhibition and pro-am events to supplement often meager tournament purses. It was not uncommon for Oliver’s total winnings for a year to be less than $20,000 and yet be in the top twenty on the money list.

We also learn about Dave Douglas, another Delaware native and a younger, taller, thinner playing partner with Oliver in several tournaments. An 8-time winner on the PGA tour, Douglas is a member of the Delaware Sports Hall of Fame along with Oliver.

However, as Riley noted in a recent interview, Douglas is now almost completely unknown to generations of golf fans. This book should help restore his rightful place in golf history. Riley said, “The Douglas story is one that I was happy to bring out in this book.”

Riley made the point in his book and our interview that Oliver’s golfing legacy was severely impacted by the interruption caused by being drafted into the Army and his subsequent 56 months of service, spanning from before Pearl Harbor to after VJ Day in 1945.

Hogan also returned to civilian life before Oliver mustered out and gained additional advantage over a player that was his match before the war. Other golfers also had shorter military service stints, making Oliver’s return to the pro tour even more challenging.

Nonetheless, Oliver won tournaments after the war and enjoyed success player on more than one Ryder Cup team. As Riley said, however, “What would he have done without losing those 56 months? Oliver’s record didn’t really define his greatness.”

Oliver was another member of the Greatest Generation who interrupted his life to serve his country. His return to the tour included one of the first televised golf events just as Arnold Palmer and a very young Jack Nicklaus were about to take center stage.

This biography is a well-deserved recognition of Oliver’s contributions to the sport he so clearly loved.