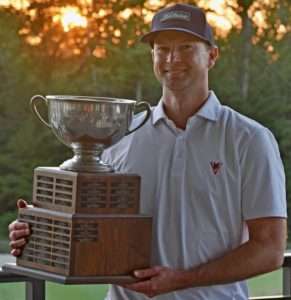 Congratulations to Zac Oakley of Bidermann Golf Club for his Aug. 23 Delaware Open victory at Plantation Lakes Golf & Country Club. The 7-under triumph was his second Open win, the first one coming in 2015.

Congratulations to Kim Stockson and Lora Drewer for winning the 2022 Rehoboth Beach CC JoJo Barrows Match Play Championship. They defeated Peggy Roca and Shelby Moore in the finals 1-up. This summer-long contest uses the better ball of partner format.

Check-in begins at 7:30 a.m. for the 8:00 a.m. start that features a few twists from the usual game, such as using a marshmallow for a golf ball on one hole.

All ages can play, with permission slips required for competing children.

Registration ($90 per foursome) can be done online at goober.golf or the day of the event. Playing slots for the 18-team field are filling up, according to Über Goober Frank Payton, so recruit your team quickly.

Proceeds from the event will support First Tee programs in Seaford and surrounding communities, working with partners such as Big Brothers/Big Sisters and area school districts.

The $150 per golfer fee covers the round, beverages, contests, raffles, and prizes, as well as a post-round cookout.

For more information about playing or sponsorships, go to www.ftdeiss22.givesmart.com or call 302-290-1250.