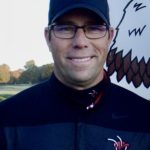 Cricket Wireless is a tournament sponsor and accommodations are being handled by Sleep Inn on Coastal Highway.

Participating teams include several of DSU’s new partners from the Northeast Conference as well as regular conference rivals in the Mid-Eastern Athletic Conference.

In July the Lady Hornets combined with teams from Howard University, Coppin State, University of Maryland-Eastern Shore, and North Carolina Central in an associate partnership between the MEAC and the NEC. The agreement creates opportunities for regular season matches, the NEC conference championship, and automatic qualifier access to the NCAA championship.

DSU’s golfing skills have also improved. The Hornets set a one-day team-low scoring record of 153 in a tournament last spring. McCall expects that record to either be matched or broken this year. “We have a more well-rounded cast, especially from 1 to 5. At least eight can break 80, and six can do it regularly,” he said. The increased roster limit means other DSU student-athletes can make the team as walk-ons, which McCall welcomes.

The DSU golfers arrive at the DSU Dover campus in two weeks. McCall said, “I can’t wait. I’m so excited to get into it.”

Sarah Lydic of Ocean View completed medal play at the U.S. Women’s Amateur at Chambers Bay, WA Aug. 9, but was unable to qualify among the 64 players who advanced to match play. Lydic missed the last spot by three strokes (T-89).

Those were not the results either girl wanted, but they surely benefited from the competitive experience.