I covered the BMW Championship at Wilmington Country Club a few weeks ago, the first-ever PGA TOUR event held in Delaware.

The Cape Region was well-represented among the thousands who made the trek to Chateau Country. 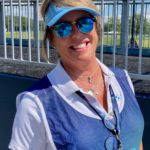 Cape Region volunteers also contributed their time and effort for this worthy goal.

For example, when I ran into Denise Sills near the club’s tenth tee, she was wearing a bib that said “ASK ME.”

Sills signed up over a year ago, responding to a notice she received through the Delaware State Golf Association.

The Kings Creek CC member received a tee sheet with golfer starting times and a tournament map with locations for the merchandise tent, sponsor hospitality venues, and, of course, restrooms.

“Everyone’s been pleasant and some are really funny,” Sills said. “I’m having a blast!”

Tom Kearns is a DuPont retiree with a home in North Shores. The plus-one handicap golfer was a former pro at Cavaliers Country Club in Christiana. For the BMW, he was a tee ball spotter at the fifth hole.

Standing just behind the tee box, Kearns watched the pros hit and held up two paddles. Spotter volunteers further up the hole followed his signal to locate the balls’ resting places, a service which was especially handy when the golfers missed the fairways. 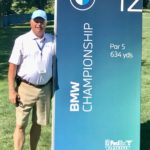 “It’s such a treat to watch how good these pros are,” Kearns said.

Kevin Conlon had the same responsibility behind the tee of the uphill par-5 twelfth hole. The Fenwick Island retiree and Fort Miles Bunker Buster volunteer enjoyed the chance to interact with the golf pros.

“A lot of them would come up and ask if it was clear for them to hit. We had to wait for signals from the volunteers up the fairway, because it dropped off after the crest and we couldn’t see for ourselves,” he said. “Most would either thank us or ask how we were doing [in the heat].”

Jim and Lisa Hutchins of Milford are avid golfers. Lisa won multiple club championships at the former Shawnee CC, and both previously volunteered at pro golf events in Pennsylvania. 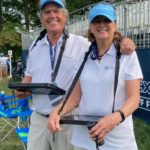 The couple was busy working with their specialized ShotLink computers up by the sixth green.

ShotLink provides near-instant ball location data for every shot in every round on the PGA Tour. The system requires dozens of volunteers working with paid staff. The Hutchins’s and the other ShotLinkers attended several training sessions before the tournament began, including the pro-am day, to learn the tricks of their new trade.

They commuted during their sessions, parking at the Volunteer lot at the Concord Mall a few miles away. 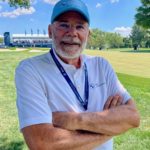 Jeff Stone of Milton worked as a ball spotter along the 16th fairway. He could often take advantage of tree shade in the left rough 90 yards from the green.

Stone said, “The two I had the most interaction with, Justin Thomas and Jordan Spieth, were gracious enough to turn and say ‘thanks for your help’ after making shots from difficult lies. When players asked us to take down the ropes, to a person they said please. I was impressed considering the high stakes game they were engaged in and the pressure they must feel. The conversations between players and caddies, their focus on the next shot, the calculus that went into it and the execution of the shot were amazing to hear and see up close.” 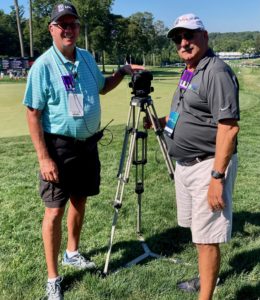 Fran Simeone of near Millsboro was a different kind of BMW volunteer. “My nephew [Jeremy McElroy] is a cameraman, and he got in touch with me to help carry ‘the sticks’ [portable tripods] to hold the camera,” he said.

Simeone recruited some of his buddies, such as Billy Newell of West Chester, PA to join in the fun of lugging equipment. Their work reminded me of Mark Twain’s Tom Sawyer and the whitewashed fence. 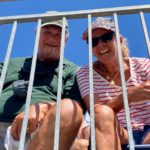 Plenty of Cape Region golf fans were also in the crowd. Bill Cowan of Lewes and I kept seeing each other as I followed a pair of pros during the tournament on Saturday. Sussex County Superior Court Judge Mark Conner was walking near the first tee when he and I met. I also caught sight of Ron and Denise Allen of Rehoboth Beach in the stands at the fifteenth hole and a few other places.

They were clearly having a great time – along with everyone else.