December 31 marks the end of this column’s twenty-fourth year and a busy twelve months of Cape Region golf. 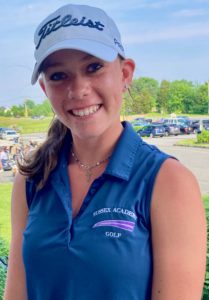 May – Sussex Academy’s unbroken victory streak ends with a single-stroke loss to Tatnall. Cape’s Vikings go on another win streak but are thumped by Sussex Academy. The Seahawks win the Henlopen Conference championship at Plantation Lakes with Cape in fourth. Delaware Open winner Zac Oakley qualifies for the PGA Championship. ESPN films the first FlingGolf tournament at American Classic.

June – Hannah Lydic wins the first-ever Girls State Championship, while leading Sussex Academy to its first-ever state team championship in any sport. Brockstedt loses to Hannah in a playoff to take second place overall. Cape qualifies for the team category but misses the cut for the second round, an improvement on recent seasons. Brockstedt and friends raise over $111,000 for Alzheimer’s in the second annual Ace Cup at Kings Creek CC. The First Tee’s Delmarva Scramble is a success.

September – Cape Region golf fans flock to the BMW Championship at Wilmington CC, including volunteer helpers, pro-am players, and spectators. The practice sessions of LPGA golfers are well worth copying by amateurs. I walk along with the family of PGA Tour pro Denny McCarthy during the third round of the BMW Championship. Delaware State University hosts a successful first collegiate women’s golf tournament at Kings Creek CC.

October – LPGA golfer Aditi Ashok’s steady round at the ShopRite LPGA Classic demonstrates how a relative short-hitter keeps up with longer-hitting competition. Harold Varner III and Alex Noren at the BMW Championship show what a difference staying in the fairway can make. Dartmouth takes the individual and team titles at the Lady Blue Hen Invitational at RBCC. Paul Caras of Milton makes his third ace 45 years after his second hole in one.

November – Austin Ebersole and Britt Morrison of American Classic Golf Club in Midway are the 2022 World League FlingGolf champions. Inflation hits the golf business like many others. Charity is the big winner at dozens of Cape Region tournaments

December – This year’s collection of what I don’t want for Christmas is remarkable, and not in a good way. On the other hand, local golf gift opportunities are very good.

Thanks for reading! I look forward to another year of writing about Cape Region golf