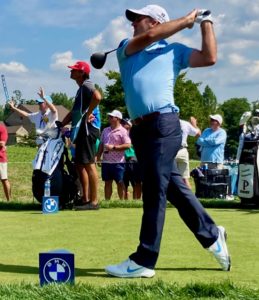 After Friday’s round at the BMW Championship, I seized an opportunity that appeared on my shuttle bus leaving Wilmington Country Club.

I introduced myself to Dennis as we left the shuttle and noted that as a native of Rockville, MD, Denny was the closest Delaware had to a local Tour pro in the BMW. Dennis readily agreed to spend the third round together the next day.

We met along the first fairway as Denny hit an approach shot from about 100 yards. He birdied the hole – and when a Tour player’s dad cheers, it is noticeably louder than normal.

Dennis introduced me to his brother Mike, a Bethesda, MD resident and former golfer for James Madison University. Dennis is a member of Argyle CC in Silver Spring and carries a 2.9 handicap index.

Dennis and his wife Elena often travel to watch Denny play. This year’s itinerary included Hilton Head, the U.S. Open in Boston, and TPC Avenel in Potomac, MD for the Wells Fargo. Denny’s sister Christina, who lives in Baltimore, went to four tournaments this year to watch big brother compete. “I’m very proud of him,” she said. “It’s been quite a journey!”

Denny’s older brother Ryan is also a good golfer but decided to join the family’s commercial real estate business. He and his wife Jackie and baby boy Christopher walked up and down the hills to see the action.

Christopher seemed less impressed than the rest of us.

As we watched, Dennis filled me in on Denny’s sporting history, which extends well past golf.

Dennis said his son’s eye/hand coordination was always good and only became better as he matured. Denny first beat his father in golf at age 12. He became a multi-sport athlete at Georgetown Prep, including playing second guard on the basketball team, raining three pointers from all over.

Denny became a standout golfer for the University of Virginia after graduating high school in 2011. He went pro from there, earning his Korn Ferry card in 2016 and PGA Tour status in 2018.

He played well in the first round of the BMW but suffered in the heat of the second round. After Saturday’s round Denny said, “yesterday kind of took me by surprise. I just don’t think I ate enough on the course and probably just didn’t quite drink enough, and I just felt a little off.”

He turned things around as we watched, with birdies on three holes on the front nine with no bogeys. Denny made a great par save on the par 4 tenth hole after driving into a fairway bunker. His recovery shot came up 35 yards short of the green. A pitch from there ran 12 feet too far, but he made the come backer.

As the cheers subsided, Dennis turned to me and said, “Those putts are the glue that keeps a round together.”

When I later told Denny about his dad’s reaction, he replied, “He said it about right. I kind of drove it into the face of a bunker there, was never really in the hole until I made that nice putt. It’s the same as somebody striping it down the middle and hitting it 10 feet and missing. We made the same score. So yeah, that was a nice little kind of boost.” 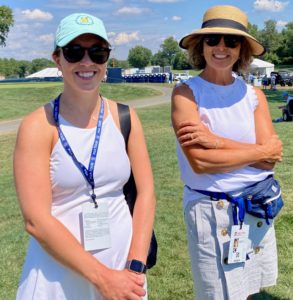 He made the single bogey of his round on the 11th hole but bounced back with three more birdies for a 5-under 66.

Elena McCarthy passed along two more stories. She first said, “My kids know it’s not where you start it’s where you finish.”

She also said the family often vacationed at the beach, but her golf-mad boys could not stay away from their favorite game. “Ryan and Denny would spend all their time making golf holes in the sand,” she said, adding that they would send their sister to get a bucket and fill it with ocean water for the “ponds.”

That kind of dedication to your sport is worth remembering – as is the age-old trick of getting a younger sibling to help you.

Robbie Monkman won the second flight, with Kim Parks in second, Jeannine Doane in third, and Celeste Beaupre in fourth.