The PGA Tour’s recent return to action in Hawaii means these highly skilled golfers are once again giving the rest of us an opportunity. Watching them in action during the televised broadcasts can provide useful golf lessons for careful observers in the amateur ranks.

For example, during last summer’s second round of the BMW Championship at Wilmington Country Club, Brendan Steele and Matt Kuchar showed that taking your medicine instead of going for a heroic recovery shot keeps disaster holes from filling your scorecard. 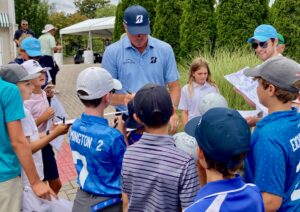 Matt Kuchar signs autographs for kids at the 2022 BMW Championship

Kuchar began the day at 2-under par, while Steele had struggled to a 5-over par total on his first round.

Kuchar’s opening tee shot was not a promising sign. It clattered into the trees right of the first fairway and finished 129 yards from the hole. His approach shot was also restricted by overhanging branches. After a few practice swings, Kuchar hit his iron with a sawed-off follow-through. That technique kept the ball low enough to avoid trouble and reach the green about 14 feet below the hole. His recovery turned into a routine par.

Steeler’s tee shot on the uphill dogleg right par-5 third hole landed up against the steep front face of a fairway bunker on the right corner, about 272 yards from the hole. He took his medicine and hit a short recovery wedge. It popped over the bunker and finished about 50 yards away. From there, Steele’s third shot finished on the green 37 feet below the hole. His birdie attempt stopped a foot away and he made par. That result looked highly unlikely when Steele stepped into that bunker.

On the downhill par-4 fifth hole, Steele’s drive again landed in a fairway bunker, about 160 yards from the hole. However, trying to reach the green from there required hitting a downhill shot over two ponds that guarded the front of the green. Instead, Steele took his medicine and hit a short wedge shot to about 115 yards out.

Unfortunately, his recovery shot ran a few yards past the fairway and into deep rough at the first pond’s edge. Steele’s third shot landed on the green but presented him with an 80-foot uphill challenge. Under the circumstances his bogey was an acceptable result. It could have easily been worse.

Kuchar drove into the left fairway bunker on the downhill tenth hole. The bunker face gave him no chance to reach the green 150 yards away. Instead, he split the distance with a wedge to 85 yards and hit a third shot to 7 feet from the hole. The crowd applauded his par-saving putt.

The former Georgia Tech star’s drive on the downhill par-5 14th hole went left again, 288 yards out, in the rough, and with a steep slope for his stance for the next shot. Kuchar again took the safe route, landing his second shot of about 190 yards to the fairway, 100 yards from the hole. He showed off his touring pro credentials with an approach to 5 feet and a nice birdie, the only one he made that day.

Steele played much better than his first round, finishing with five birdies, the one bogey, and a 67 total. Kuchar made 16 pars. His only bogey came from a three-putt on the 11th hole, courtesy of an uphill first putt from 52 feet that stopped 12 feet short. His 71 kept him at 2-under for the first two rounds.

Steele finished the tournament two days later tied for 32nd. Kuchar tied for 35th, one stroke behind Steele. The BMW Championship was their last tournament for 2022.

Both golfers faced challenges from sub-optimal conditions and took their medicine. They adjusted their tactics to reduce risk and keep alive the possibility of a good score. Together they created a handy lesson in course management. There will be more good examples on the PGA and the other professional tours in the coming months. 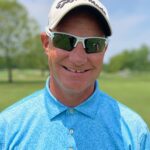 I spoke about this type of golf medicine with Chris Gray, a former touring pro and the current lead golf instructor at Rehoboth Beach Country Club. As usual, Gray had a witty and helpful take on this subject.

“I try all the time to get my students to understand the importance of taking their medicine and keeping big numbers off the card. The problem is everyone thinks they can hit the hero shot on call. If the best in the world can’t, what are the real chances for us mere mortals?” he said.

Gray continued: “That’s the key to keeping rounds going or even jump-starting a round and shooting a low score. Keep the big number off the card. If you don’t have a 70% chance or better at pulling off the shot, then take the safe play. That was always my way of thinking unless you were trying to win a tournament.”

Bad results happen in golf, even with the best of intentions and a good swing. A well-thought-out recovery shot is usually the best response. For veteran pros like Kuchar and Steele, using that approach helped them achieve and maintain their long and successful careers.