Baywood Greens in the fall

You might think that by now I would have played Baywood Greens. After all, it’s been open for just about as long as I’ve been writing this column.

Until this week, that assumption would have been mistaken.

Somehow, despite covering such events as the Henlopen Conference Championships and the opening of the palatial clubhouse at the “exclusively public” golf course, I hadn’t managed to play a round there myself.

A 2007 Father’s Day gift certificate helped remedy that small problem, but I had to use it before the certificate’s expiration date.

Fortunately, I had a day off, and older daughter’s gentleman friend, Chris Theim, was more than willing to accompany me for the day.

The Baywoods staff was uniformly pleasant, although the weather conditions were not. November 12 started out cold, damp, and drizzly, and pretty much stayed that way all morning. By the 11:36 tee time, however, the sprinkles stopped, leaving us with a gray, breezy challenge to what passes for our golfing skills.

Two other Cape Region golfers, Bill Huntzberger and Bob Coleman, joined us at the tenth tee for the start. Coleman retired from work in Baltimore, and Huntzberger shifted from retirement from DuPont to a new position teaching at the Sussex Consortium. They had played the course before, and provided several useful tips during the round. 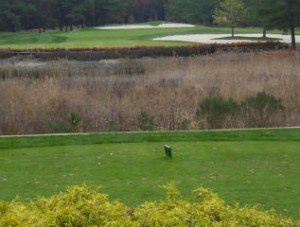 The view over the marshland looks more intimidating than it really is, at this par-3 hole at Baywood Greens.

Sometimes the advice didn’t help, but it wasn’t their fault. A snap hook shot into the pond fronting the 169 yard par-3 11th hole was immediately followed by laying the sod over a 9-iron shot from the drop area, putting the second ball into a different part of the same pond.

More water troubles faced us on the 14th hole. This 385-yard par 4 gives players the option to hit to an island fairway for a short approach, or an easier but longer route to the right of the pond edging the island.

I split the difference perfectly, with a drive that landed dead center in the pond between the island and the mainland.

Fortunately, the drop area was on the island, 150 yards from the green. I made a wet bogey on the hole despite the botched tee shot.

Despite the challenges facing players on several tee shots, the course was predominantly manageable. If a drive on a par 4 was less than expected, a short iron back to the fairway would usually provide a chance to reach the green in three with another wedge, with a one-putt par or two-putt bogey almost a sure thing.

The greens had recently been aerated and top-dressed, but approach shots would still stop quickly. My tee shot on the 158-yard par 3 15th hole landed a few feet below the hole, and Huntzberger said it was a good thing, too. He explained that the slope from back to front is steep enough to make it nearly impossible to stop a putt from running off the green.

In addition to the fairly generous fairways, the greens were also notable for their sheer size. Several of them appeared to be at least twice the square footage of the greens at Shawnee Country Club.

This design feature makes sense for Baywood. It provides a wide variety of hole locations for the busy public layout. The frequent slopes and swoops on the green surfaces also add to the challenge.

The Baywoods gardening staff was busy working at the pond edge adjacent to the 16th hole, the picturesque par-5 that runs along Route 24. On other holes, several rose bushes held on to the last few blooms of the late fall. I’ve been at the course when thousands of flowers dot the place, but even in November the layout retains its visual charms.

A string of bogeys and two finishing pars brought my round to a close, and we headed home.

Baywoods is a very nice course to play, and especially for Sussex County residents in the fall and winter.

During the off-season it’s a very reasonable $35 for 18 holes, including range access and a cart with GPS displays.