My friends and I, mostly bogey golfers, tend to hit our tee shots about the same length.

For a round of golf on a typical 6,000-yard course, those aren’t awful numbers. With good approach shots and a decent short game, scores of par or something close to it are certainly possible.

I can prove this is true, even if it’s not something I’ve ever done.

I walked the 6,177 yard Bay Course at the Stockton Seaview Resort, while watching LPGA golfer Julieta Grenada post a 1-over par 72 in the first round of the ShopRite LPGA Classic, presented by Acer.

Grenada is one of the short hitters on the LPGA, with a 237-yard average that ranks her 133d among her competitors. During the May 29 ShopRite round, she hit drives that ranged from 200 to 260, with half of them going between 200 and 225 yards.

On the other hand, she made ten greens in regulation, including a short par-five where she ran a 3-wood onto the green in two. She made six one-putts, three bogeys, and two birdies.

Grenada was exceptional with her chip shots. Seven of them led to six pars and a birdie. Her only short game mishaps of any consequence took place late in the round.

After she finished, we discussed her troubles on the 16th hole, a 377-yard par four. Grenada hit a 225-yard drive, and her approach shot bounced just left of the green, hard against a collar of rough beyond the six-foot wide fringe. A putt from there stopped on the green 18 feet short of the hole, requiring two more putts to make the eventual bogey.

“That was a bad lie. The ball was actually in a little hole, and if I was going to chip I would have had to nip it perfectly. That’s why I putted, but it popped up and stopped,” Grenada said.

The 115-yard par-3 17th hole provided a reminder that Donald Ross designs often feature trouble beyond the green, not just on the front and sides.

Grenada and her playing competitors, Q Baek and Sun Young Yoo of South Korea, all hit their tee shots a little long. Their balls rolled off the backside mounding beyond the green.

Yoo and Baek were able to chip or putt close enough for pars. Grenada’s chip ran a bit too far past the hole, however, leading to a clearly annoying bogey.

Grenada is a great example of the fact that length off the tee can be overrated, if you are using the appropriate tee boxes for your handicap. Bogey golfers should spend far more practice time on their approach shots and greenside short games, if they truly wish to improve.

In her post-round interview, Grenada was more self-critical than I expected. Perhaps her standards are more exacting.

“My swing was off a little bit. I was driving well, and that’s usually when I have trouble with the other clubs. When I hit my irons well, then my driver gives me trouble. It has to do with the way I swing,” Grenada said.

When I said her drives looked good, with a bit of a draw and no real fades, she agreed. “When I hit them well, they’re usually a draw. They go right when I am missing it.”

We also chatted about her pre-shot routine, where she grips a club a few inches down from the end, and very slowly mimics a full swing. Grenada said, “I’m focusing on making a complete turn with my stomach, or core. I started doing that a while ago, and it was working for me, so now I do it all the time. I never thought it was a good idea to make a practice swing–it’s a waste of energy, and you just get tired,” she grinned.

Grenada shot one-over par on each of the next two rounds, finishing in a tie for 64th, nine strokes back of eventual winner Anna Nordqvist. She tied for 11th place in the next event, the Manulife LPGA Classic in Ontario, Canada, shooting 13-under par.

Ace at The Peninsula

Congratulations to Art Henry, who made his first-ever hole-in-one at The Peninsula on June 5. He used a five-iron from 100 yards out on the par-3 13th hole. 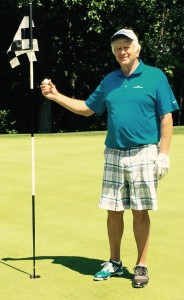 Nick DelCampo made his second hole-in-one in two years, while wearing two kinds of shoes.

A year ago I wrote about Cape Henlopen High School volleyball coach Nick DelCampo’s first hole-in-one, after only 55 years of playing golf. On June 7 he made his second ace, while wearing two different golf shoes, which must be some kind of record. He used a 6-iron on the 167-yard par 3 13th hole, during the Kings Creek CC Mixed Member-Member Tournament.

DelCampo said he was breaking in a new pair of shoes: “My left foot is bigger than the right and [I] was having problems with the new left one. Switched after nine. Only had time for one shoe change plus my right [foot] was really comfortable.”

Well all right then.

The Kings Creek CC Ladies Golf League played a Step Aside Scramble June 4. Linda Outlaw, Barbara Wisneski, and Robbie Monkman combined for first place, while Tricia Ritthaler, Sherry Pie, Prabhat Karapurkar, and Pattie Magee teamed up for second. Wisneski also had the closest to the pin shot for the day.