Sawyer Brockstedt is having a great summer. 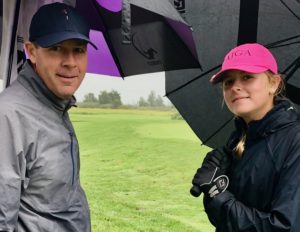 Twenty girls in Brockstedt’s group played the first round on the Bay Course at Seaview Resort & Spa, home of the ShopRite LPGA Classic sponsored by Acer currently scheduled for early October. Fifteen of these juniors completed the second round in tough conditions on the challenging 5,017 yard par 71 layout.

“It was challenging,” Brockstedt said. “Both days were windy, but on the second day we also had rain.”

“I was two-over on the first round, and that was with a triple and a double bogey. At that point I was tied for the lead. On the second day I shot a 76, and that was a really good score because it was pouring down rain. I won by one shot,” she said.

Her double bogey in the first round would be familiar to LPGA players. The tee box for the par-3 11th hole used for the JGNC is also the same one used in the ShopRite. Tall fescue nearly surrounds the hole. “My tee shot went into the fescue short and right. It’s really hard to get out of it,” Brockstedt said.

The JGNC is open to all junior golfers 8-18, and without prior playing points or other pre-competition requirements. Normally there are local qualifying tournaments to reach the regional stage, but the response to the pandemic eliminated that first level.

Regional qualifying tournaments accepted up to 180 participants across a range of age groups. Up to 140 competitors from the regionals become eligible for the National Championship, held this year at Koasati Pines at Coushatta, in Kinder, LA November 15-17.

Two of Brockstedt’s national level golfing buddies, Kate Barber of Georgia and Ellison Lundquist of Furlong, PA, have also qualified for the JGNC nationals. “It’ll be good to see them,” she said.

Two hours of the finals will be televised in prime time on The Golf Channel. Brockstedt experienced televised golf when she tied for fourth place in the national Drive Chip & Putt championship at August National Golf Club in 2018.

The Brockstedts are active members of Kings Creek CC, so I predict the TVs at the club will be tuned to the Golf Channel in mid-November.

Congratulations to Tim Gallagher of Lewes for winning his second straight Men’s Division Club Championship at The Rookery Aug. 1-2, played at both North and South courses. The retired Delaware state trooper won by five strokes over Todd French, with John Cole in third place one stroke further back.

Mike Poulis won the Seniors division, with Bob Viscount in second and Thomas Rudden in third.

Mike Hughes came in first in the B flight with Peter Napolitano in second. Mike Foster won the C flight followed by Steve Walters in second. 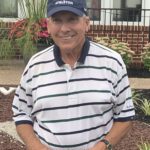 Tim Coar of Georgetown made his eighth hole in one on July 3 at Mulligans’ Pointe. The Georgetown senior aced the 132-yard sixth hole.

Not to be outdone, Russell Fink of Milton made his second-ever ace on August 15, at the same hole and from the same yardage.

Mulligans’ Pointe is holding its third Lucky Cup Open Sept. 22, open to members and non-members with an established USGA (GHIN) handicap. The entry fee of $65 (members) and $75 (nonmembers) covers the golf, cart, practice balls at the range, prizes, and an awards luncheon. It can be paid the day of the event.

The two divisions, Mens and Womens, use the same 18-hole stroke play format. The Champions will be determined by net scores, although prizes for low gross will also be awarded.

The Kings Creek CC Ladies 18-hole group played a Three Blind Mice game Aug. 13, in which the three best scores were taken off the total.