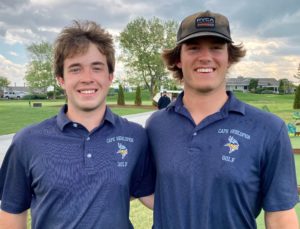 The Cape Henlopen golf team split their two most recent matches, including their last home match of the 2021 season, bringing their record to 7-3.

On Senior Day, May 5, the Vikings hosted Sussex Academy, losing a well-fought contest 166-176. Sawyer Brockstedt won medalist honors for her visiting team with a two-over-par 38 on the front nine at Rehoboth Beach Country Club.

“I was three over through the seventh hole,” Brockstedt said. “I birdied the ninth hole so that was good.”

Quinn McCullough, one of two Cape seniors honored before the round along with Forest Dotterer, shot his best of the season with a 40. That was also best of the day for the Vikings. “It was really good. I bogeyed the first three holes, parred 4, parred 5, birdied 6, parred 7, and bogeyed 8 and 9. My putting was good and so were my drives,” he said.

Ethan Mercer scored next for Cape with his 42. Dylan Steinwedel’s 45 was his best total for the year. Tom Burn’s 49 completed the team scoring.

The Vikings defeated Sussex Central April 30 on the front nine at Rehoboth Beach CC 185-237, with McCullough earning medalist honors with his 43. Burn came in second for Cape with his 45, while Mercer scored a 46 for third best that day. Dotterer’s 51 finished the team scoring.

During our post-round chat after the Sussex Central match, McCullough discussed his triple bogey on the second hole. His drive landed in the pond left of the fairway. After taking a drop and penalty stroke, McCullough’s next shot went too far to the right, leading to additional trouble. He remained annoyed about his second mistake, which I consider a good sign for McCullough’s continuing development in the game.

Congratulations to the Delaware State University women’s golf team for its $100,000 grant from the PGA Tour, as part of the Tour’s recently announced $500,000 donation to five historically black colleges and universities. Other recipients included Tennessee State, Wilberforce University, and Bowie State University.

According to Hornets head coach Rick McCall, Jr., the money has not been fully allocated yet. He said some of it will go to the First Tee of Delaware and to the Little School at Kids Cottage in Dover.

Demo Days at The Rookery

Demo day at The Rookery used to be a group effort, with several club makers gathered together at one time for golfers to check out the new offerings. Due to pandemic precautions, this year there will be separate demo days, with appointments are required for 30-minute sessions.

There is an early bird special of $25 off the normal $125 registration fee for the first 120 golfers who meet the June 1 deadline. The fee covers a free pair of FootJoy golf shoes, the range, golf with cart, team photo, food stations and drinks on course.

Sponsorship opportunities remain available along with playing spots. For more information contact Alicia Hollis at 302-422-4014 ext. 3015 or by email at hollisa @ksiinc.org.

The Mulligan’s Pointe Ladies 18-hole group played a Crier’s game May 5, where the worst scores on three holes are cut from the total.

On May 4 the Kings Creek CC Ladies 9-Hole group played Far Out, where no par 5 scores are counted.

There are 178 players in the Kings Creek CC Ladies Golf Association for the 2021 season, and dozens participated in the Opening Day Scramble April 29.